PM Fico before Smer congress: I don’t want to run for president

At the party congress, vice-chairman of the ruling party, Marek Maďarič, has been replaced by Richard Raši. Otherwise, no major changes have taken place. 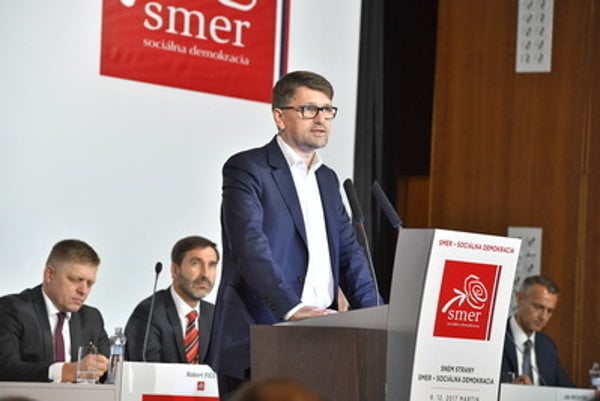 The Prime Minister and chairman of the ruling Smer party, Robert Fico, announced that he will not run for president in the 2019 presidential election at a press conference in parliament on December 8.

“I’m swearing this on my son’s health, and you know that I keep my word,” Fico said, as quoted by the TASR newswire. “I won’t run for president.”

When a journalist challenged the prime minister about keeping his word, reminding him of his statement that he would no longer be in politics in 2014, Fico said that he would remain in politics as long as there is interest in his service with the public. Regarding the PM’s unsuccessful bid in the 2014 presidential election, Fico said that it was a political mistake to run for president as a prime minister.

“My voters tell me they didn’t vote for me because they wanted me to remain prime minister,” Fico said, as quoted by TASR. “No matter where I am and what’s going on, I won’t run for the post of president in 2019.”

There is still time to look for a suitable candidate, the prime minister added.

Change in the Smer's leadership

Meanwhile, the ruling Smer party congress heard a critical speech by Marek Maďaric during its congress in Martin on December 9, which received long applause from the delegates, the Sme daily wrote. The congress also received threats from Fico that if anybody throws a stone at them [i.e. the party], they will respond by throwing back two.

“Are our ideas convincing enough? Are we trustworthy enough in presenting them? Are we ready to change the party and also ourselves as part of the process?” asked Maďarič, as quoted by Sme, adding that he is trying to avoid the fate of the once mighty HZDS party of Vladimír Mečiar, now extinct.

While Fico, has been describing the results of the November regional elections as a success for the party, the culture minister was not shy with his criticisms at the congress.

“We’ve lost four governors and we weren’t even able to present a candidate [for governor] in the Bratislava region,” he said, as quoted by the TASR newswire. “The regional elections have provided an opportunity for deep self-reflection. Self-criticism isn’t a display of weakness, but it’s a measure of inner strength.”

The minister stressed that if a party wants to be present on the political scene, it needs to have values and ideas consistent with the interests of its voters and at the same time, have officials acting in a trustworthy manner, in line with these values. Subsequently, the party must replace officials who have lost energy or who harm its trustworthiness.

The former Smer vice-chairman believes that the party must return to its ideals.

“I view major changes as necessary. That’s why I’ve resigned – I wanted to begin with myself,” said Maďarič, as quoted by Sme.

After the congress meeting, he told journalists that he has not created a faction within Smer, though he does not feel alone in harbouring some critical views after what he calls the failed regional elections. However, he is also not going to leave the party anytime soon, he added.

He was applauded for his speech but failed with his proposals, which is why he resigned from the post of party deputy chairman. Fico’s applause following his speech was lukewarm and brief, according to Sme.

“The problem for Smer is that it is frequently in government,” the new vice-chair said.

In his opinion, the problem of losing support will be resolved if they start meeting more often with people, which is what Fico suggests as well.

In the coming weeks, the party leadership will decide on the post of general manager: the incumbent, Labour Minister Ján Richter, is expected to leave this post and keep his ministerial post.

Maďarič has repeatedly said that he would not resign if he was made Interior Minister, (a post currently held by Robert Kaliňák) but he did not name anybody specifically in his speech. Kaliňák gave the impression that he was relaxed and reiterated that they made a case for shady businessman, Ladislav Bašternák, and that he sees no reason to go, Sme wrote.

The party still has high ambitions despite a falling number of voters since the elections in 2012, the Pravda daily wrote. Fico wants to win the 5th parliamentary elections while Smer plans to return the attacks of the opposition. Fico would like to add several work and social rights, including minimum wage as well as the upper limit for retirement age, into the Constitution.

The leadership should replace several regional heads based on the suggestion of Robert Fico, Pravda also wrote, adding that rumour has it this will occur in Trnava, Banská Bystrica and Prešov.