Treatment of infertility can cost tens, or even several thousand euros. Only part of the cost is covered by health insurance companies. 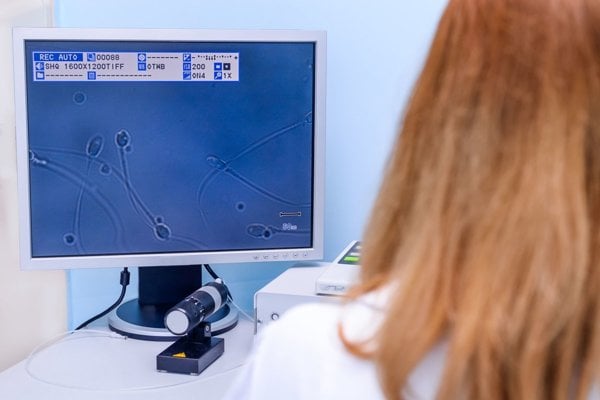 To be fertile, a man has to have 15 million sperms per milligram of ejaculate, of which 4 million must be healthy. (Source: Fotolia)
Font size:A-|A+

There are more and more couples than ever in Slovakia who try to conceive for more than a year without effect. Almost one half of the responsibility for infertility in a couple lies with men, experts estimate.

Recently, it appears young men are threatened more by infertility than those aged 40 and over.

At the beginning of December, host of private TV Markíza, Viktor Vincze, husband of host and MC Adela Vinczeová (Banášová) complained about his infertility on social networks.

“Why does my body produce three times fewer sperm per millimetre than is the border-line minimum, according to the World Health Organisation?” he asks in a status. “Why is most of their morphology inadequate for conception? The answer from the experts on reproduction was? We don’t know,” he wrote after two seminograms. This is an examination which checks how many and of what quality and motility the man’s sperms are. Vincze said, in a separate interview with Sme, that he hopes he could still conceive naturally with his wife Adela.

Every sixth couple is infertile

“In Europe, around 15 percent of couples are infertile, according to the European Society of Human Reproduction and Embryology (ESHRE) which in effect means every sixth couple,” explains Peter Krajkovič, chief doctor of the Helios sanatorium in Martin, where the Slovak centre for assisted reproduction is located. The Europe-wide data are valid also for Slovakia.

“There are only a few percent of absolutely infertile men, those who have no sperm at all, or who do not have ejaculation,” Krajkovič says. “Mostly, we talk about reduced fertility, i.e. the man has a lower number and quality of sperm,” he explains, adding that for long years it was widely held that women carry half the responsibility for infertility, while men have a 30-percent share and in 20 percent of cases, both are to be blamed. “This is not true anymore,” he notes.

“The responsibility is about fifty-fifty,” reproduction expert for the Health Ministry, Jozef Války, said back in 2010 about the share of infertility between men and women. Not just the share of men in the infertility of a couple has increased but also their absolute number.

Although the absolute numbers are not known, health insurers which cover the treatment claim a clear increase. This can be best be seen through the number of applications for artificial insemination. “We can confirm that in the course of five years, the number of requests for artificial insemination has almost doubled,” spokesperson of the Union health insurer, Beáta Dupaľová, said.

The second biggest health insurer, private firm Dôvera, pays annually for the diagnostics of male infertility for about 4,000 clients, its spokesman Matej Štepiansky says. One diagnostic test costs €7.50 on average.

When Sme reported on this issue seven years ago, Války said that those stricken by infertility come mostly form northern Slovakia and in the vicinity of Levice. “This is not true anymore, male infertility is a general problem of all regions,” Krajkovič updates.