Artworks made of snow grow in front of Rainer's challet

The challet's manager, Peter Petras, plans to have them built by Christmas. 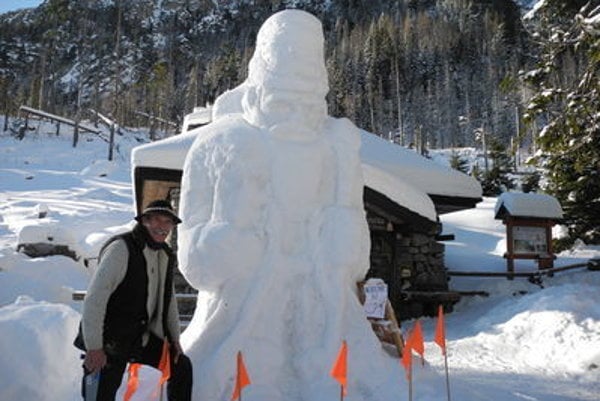 The manager of Rainer's challet in the High Tatras, Peter Petras, plans to build a total of three snow-works before Christmas, at the Starolesnianska Poľana in the High Tatras. Currently, already a statue of St Nicholas, almost four metres tall, is standing there, and the skeleton for the Nativity Scene is prepared, too. 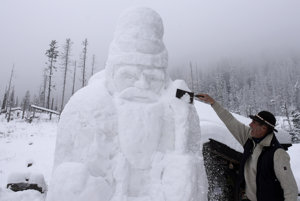 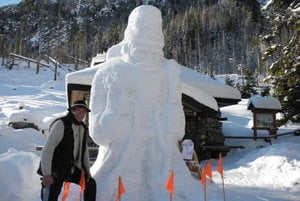 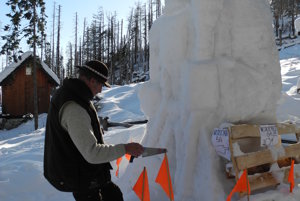 “We had St Nicholas last year on Decemebr 6 too, as there were very good snow conditions and currently, the situaiton is the same,“ Petras commented, as quoted by the TASR newswire. "Last year's was a prototype, and now I have removed all the flaws of the composition, so I think that he is quite well-done," the manager and caretaker of the challet said.

Many tourists noticed that St Nicholas bears a striking resemblance to Petras. Also, when he built a Sherpa, or a mountain bearer, out of snow, the same was true.

“I think that when you do or create something, you give it the shape that is close to you or that you see most frequently,“ Petras explained for TASR. “And when I look in the mirror in the morning, I see myself – so maybe this is the reason. But I admit that even if I make a snow horse, he will look like me.“

It took him more than a week to complete St Nicholas, as the snow was slightly dry and powdery and it took longer than usual.

His son helps him heap up the snow in a pile but Petras then finishes the composition and details of the statues himself. 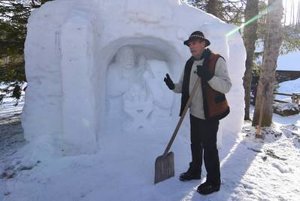 The skeleton of the Nativity Scene is almost finished, the challet manager says, adding that they would need some warmer weather and some thawing to make the powdery snow wet and then, when the frost comes, tougher. "Then it would be easier to make the dome – which is the base of the whole structure, holding the roof and preventing it from collapsing on the statues," he explains, adding that the Nativity Scene, the eighteenth in a row, will surely be completed before Christmas. This work is an essential part of the Epiphany Noon organised by Petras each January 6. The third work, alongside St Nicholas and the Nativity Scene, to appear before Christmas in front of Rainer's challet, at the altitude of 1,301 metres above sea level, is the snow mountian bearer.

Last year, Petras got a chain-saw for Christmas and thus, it is somewhat easier for him to make the snow statues. He believes they should decorate the space near the challet for the whole winter and he does not rule out the possibility of some more being added.