Although the international operation began in March, no investigator contacted a Slovak dealer. 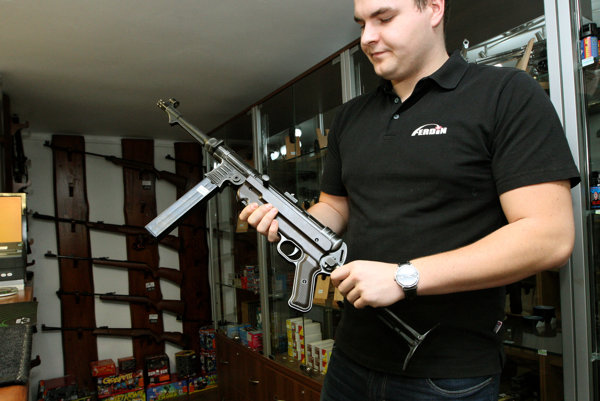 The assault team of Spanish Civil Guard stormed one of Pampolona houses in September. Their target was 24-year-old Javier Farces N., who was officially unemployed but in reality lived expensive life, travelled often, and had a yacht anchored at the port of Barcelona.

It is because Javier Farces was allegedly one of the biggest Spanish arms dealers operating on the dark net. It consists of hidden websites that allow both seller and buyer to cover their identity.

The Civil Guard confiscated more than twenty pistols, one shotgun, a large number of weapons parts, cartridges and a kilo of gunpowder.

The Spanish police have been searching after the guns since March 2017, when they found one of them in ordinary mail. They turned out to be Turkish gas pistols sold through the AFG Slovak company of Partizánske.

This company is well known to foreign investigators since its weapons have already been used in several terrorist attacks in Europe.

AFG was unaware of the fact that its weapons were once again exploited by criminals until investigative reporters from the La Sexta Spanish network visited the company in early December. Company manager František Gajdoš confirmed this to The Slovak Spectator.

This means that although Europol has been tracking those weapons for about nine months and they were used to commit at least two murders abroad none of the investigators has contacted the Slovak dealer so far.

It is a demonstration of how slowly the Slovak police investigate these cases despite the threat that terrorists will again use Slovak weapons, according to Juraj Krúpa of the Slovak Security Policy Institute (SSPI) think-tank.

“Our country just cannot deal with that,” Krúpa told The Slovak Spectator.

The police have not responded to The Slovak Spectator’s questions despite being sent a week before publishing the story.