A young Slovak sculptor, living in Brussels and Banská Bystrica, donated her Holy Family work to a parish in Luxembourg. 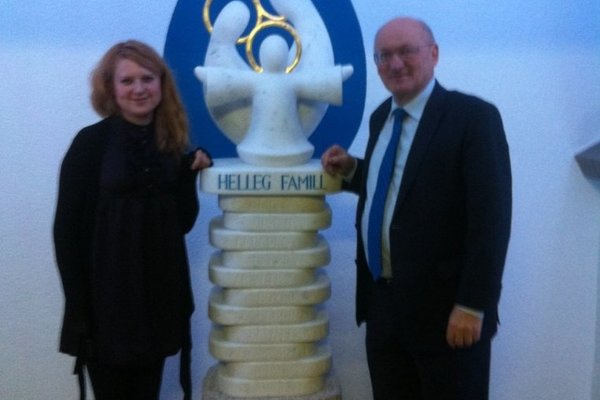 The work of Slovak sculptor Veronika Bianchi Priehodová was festively handed over to the Wincrange parish in northern Luxembourg on December 14. The symbolic statue called Holy Family was unveiled in attendance of the author and the Ambassador Plenipotentiary for Belgium and Luxembourg, Stanislav Vallo.

He mentioned, in an interview with the TASR newswire, that this parish is administered by Slovak reverend Ľubomír Fabčin, who also a priest for the Slovak community in Brussels in the past.

The author of the statue from Carrara marble is young Slovak sculptor Veronika Bianchi Priehodová, who lives alternately in Brussels and Banská Bystrica. The artwork, which is now part of the interior of the church dating back to 1950, lies on 11 pedestals meant to symbolise 11 cancelled parishes. In Luxembourg, the new law made financing of parishes fall under the local self-administration and now many smaller municipalities cannot afford to finance their own parish, Vallo explained for TASR. Thus, 11 parishes in the Clervaux canton in the north of Luxembourg were cancelled and concentrated in a single parish, that of Wincrange.