Exhibition of nativity scenes offers a trip around the globe 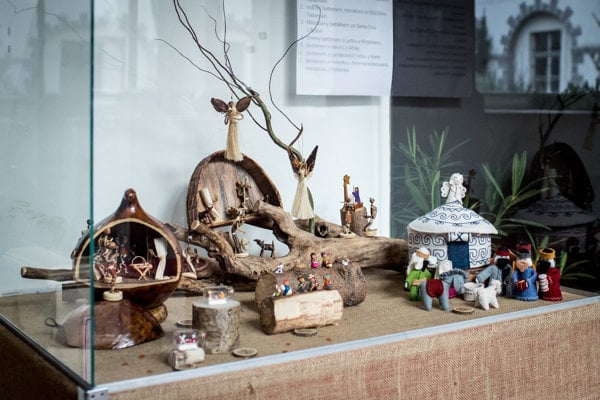 Nativity scenes have been a popular Advent and Christmas decoration in Slovakia. The tradition of creating nativity scenes goes back to St Francis of Assisi, the founder of the Franciscan order.

“St Francis recreated a live scene of Christ’s birth with Maria and Joseph in Greccio, Italy, in 1223,” explained Brother František to The Slovak Spectator, from the monastery of the Order of Friars Minor, commonly known as the Franciscans, in Bratislava. “He wanted to see and experience the birth of the Messiah and mediate this experience for other people. With this he also wanted to point out that he was born into the world in a state of poverty, humility, and simplicity.”

Afterwards the creation of nativity scenes, which in Slovakia are commonly known as Bethlehems according to the place where Jesus Christ was born, has become part of the Franciscan tradition and spread around the world. Splendid, life-size nativity scenes in churches started to be created. However, Emperor Joseph II did not like how much money was spent on the scenes and he banned them from churches in the late 18th century.

“Maybe it was this ban that led to the popularity of people creating small nativity scenes on their own,” said Brother František.

The exhibition is open in the cloister on Františkánske Square prior, during and after each mass until the end of January. During Christmas holiday(from December 25 until January 1) it will be open throughout the day. The entry is free.

The tradition of creating nativity scenes has lasted until today. It is proven by the fifth edition of the nativity scene exhibition organised by the Franciscans. This year, in the cloister of their monastery in the Old Town, they are exhibiting 44 nativity scenes from various parts of the world.

From wood, nacre and felt

“Here we exhibit nativity scenes from our gradually growing collection as well as nativity scenes collectors or other orders lent us,” said Brother František, one organiser of the exhibition.