Although limited by generally binding regulations issued by city councils in 2016 and 2017, fireworks constitute the basis of New Year’s Eve programmes in regional cities and many smaller towns. In some, there is also a musical show and traditional runs, hiking trips or ascents to local hills - or non-traditional train rides. 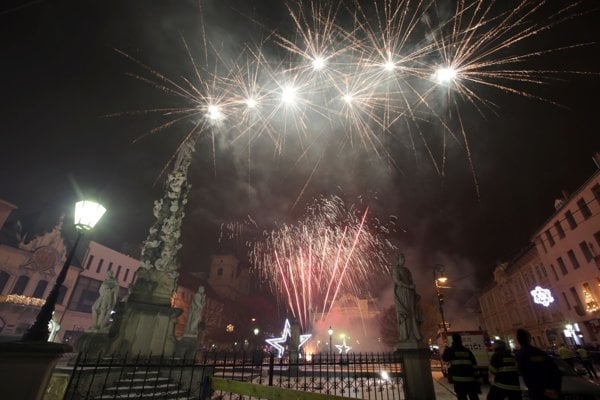 In Banská Bystrica, the city leaders decided to renew New Year’s celebrations and bring them back to SNP Square.

“Every year, we feel that Banská Bystrica inhabitants split into two groups,” Mayor Ján Nosko told the SITA newswire. “Families with children prefer the New Year’s fireworks on January 1, while others want to part with the old year in a way usual in the past. I think that celebrations surely have their place in a regional city, and so we decided to renew the tradition,” Nosko explained. He added that New Year’s Eve will officially start on December 31 at 22:00, with the bands Metalinda and Duchoňovci, as well as the local group Rock Reunion. At midnight, there will be traditional fireworks. The New Year’s Fireworks will start on January 1 at 16:30, with the Otto Voce band performing, Nosko summed up.

In western Slovakia, the regional centre of Trnava offers only two firework displays – one at 18:00 for families with children, and the traditional one at midnight. “We would like to invite people to our New Year’s concert Anima Mundi, at 16:00 on January 1, in the Franciscan Church of St James, with the German Pan pipe player Helmut Hauskeller and local organist Stanislav Šurin,” council-hall spokesman Pavol Tomašovič told SITA.

Trenčín, another regional city in the west, presents the greatest Czechoslovak, Czech and Slovak hits performed by the Hajšovci band – at 22:00 in Mierové Square. Before that (and after midnight), DJ Luky will carry the show, and at 23:30, the Happyband Orchestra will prepare party visitors for the fireworks, the city informs on its website.

Losing, instead of gaining weight

A Christmas atmosphere will return to Nitra and its centre, with kiosks offering snacks and delicacies typical for the holiday season. The programme in Svätoplukovo Square includes the Profil band and fireworks at midnight. “Those who don't want just to have fun or gain weight from good food, can come to lose extra kilos at the traditional Zobor Silvester on the last day of the year,” Pavol Ferčák of the Nitra city hall told SITA.

Moving further east, Prešov offers more varied activities for the last day of 2017: there will be a Silvester (i.e. New Year’s Eve’s) Climb to Lysá Hill, between 11:00 and 13:00, starting with a meeting at 10:00 in a parking lot under the Ski Drienica slope (the contact number is 0907/597732). For hikers and tourists, the New Year's Eve party at Šariš Castle is a chance to meet – 11:00 at the Castle – and receive a small present or get sweets for children, make a campfire with a barbecue (composed of local typical delicacies), a cup of tea, etc. Hikers can get there on foot, starting in a group at 9:00 from Prešov, while lazier people can take bus No 45, or train from Prešov or Sabinov. This will be the 32nd year of the ascent, and usually, around a thousand people take part, SITA wrote. More information and/or booking at www.kst.sk/index.php/kalendar-turistickych-podujati/event/1825-silvester-na-sarisskom-hrade; Juraj Fiľakovský (0907529461, jurajfilakovsky@gmail.com). 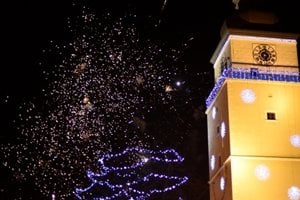 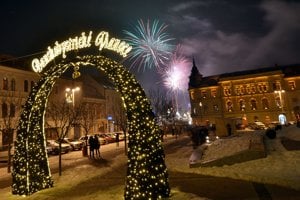 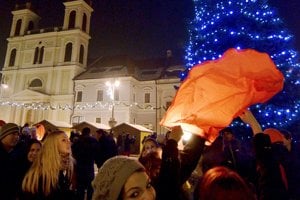 The evening programme starts at 22:00, with the local bands Heľenine Oči and Akustika. After the midnight fireworks, DJ Fonbox will continue the show in the Main Street (Hlavná ulica) long into the early morning hours, Veronika Kmetóny Gazdová informed the Slovak Spectator. She also pointed out that traffic will be re-routed from the usual places, due to the programme.

The “active end of 2017” can start a day earlier: on December 30, the Košice Children’s Railway (KDŽ) is preparing a special ride with the historical T 212.6100 diesel engine, this time not on its typical "children’s route" but rather from the Košice main station (leaving at 9:30) to Krásna and Hornádom, where a walk along the Hornád River takes the participants to the local manor house, head of the KDŽ Ľubomír Lehotský informed. A guided tour and historical fencing, creative workshops and a traditional New Year’s Eve meal of sauerkraut soup (kapustnica) are on offer. The train should return to Košice at 13:10 but in case passengers want to stay longer it can be delayed. More information available at www.detskazeleznica.sk. 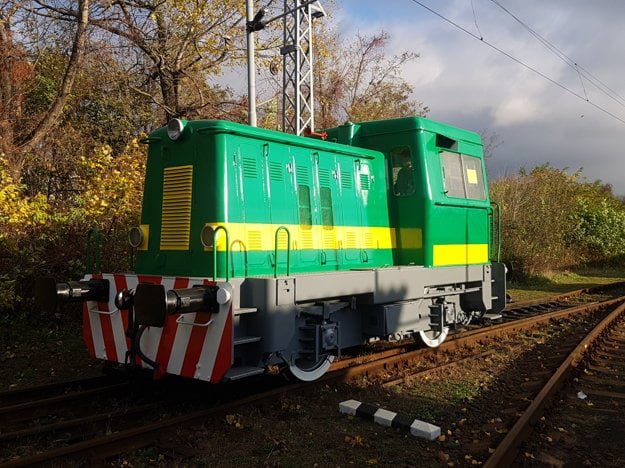 In the city of Košice itself, there will be another event for children – the Children’s New Year’s Eve in the historical city hall in Hlavná 59 at 10:00 (for free, but tickets should be booked in advance). The Divadlo Cililing theatre, UsmievAnka and hosts Silvestrík and Rišo Hergott will entertain the youngsters.

For adults, the fun starts at 20:00 in the Main (Hlavná) Street, near Immaculata. The performers include Adam Ďurica and his band, singer Veronika Rabada and band, the Funky Fusion Wendigo and more. After the midnight fireworks, DJ Pepo will take over the show, Marika Duffeková of the Visit Košice tourism organisation informed.

In some smaller towns, the end of 2017 and arrival of 2018 will be marked by fireworks as well. In Liptovský Mikuláš, there will be the Team revival band and DJ Peter Rak on offer, while the ABBA Revival band from Košice will play in Brezno, according to SITA. In Trebišov, DJ Jamal will offer his show between 23:00 and 1:30, the TASR newswire wrote.

In Poprad, no special programme has been announced but both children and adults can skate for free at the local ice stadium.

In the last two years, most city councillors have approved a generally binding regulation that limits fireworks to only specific hours on December 31 and January 1 – except for some special events, announced in advance and approved by councils. The seemingly citizen-friendly regulation can be at odds with the interests of local inhabitants and visitors, since – for example – threatens the very display of the New Year’s fireworks in Banská Bystrica, or the Children’s Fireworks in Trnava. It seems that the councilors will have to approve an exemption from their own regulation.