Hungarian state opera tours Slovakia. Where can you see it?

Due to the closure and renovation of its residence, the Hungarian State Opera, including its ballet section, has embarked on a tour that makes three stops in Slovakia. 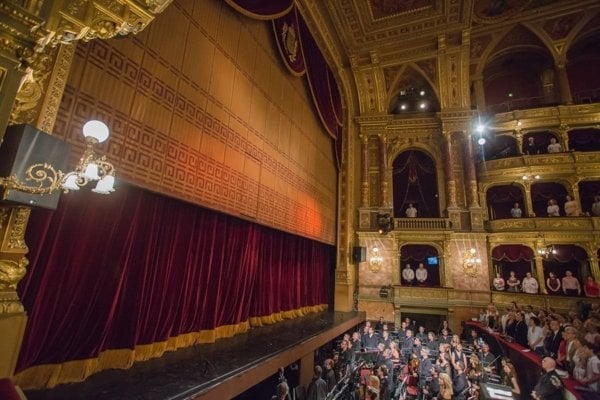 The building of Hungarian State Opera will be closed for renovaiton, and so the ensemble will tour - also Slovakia. (Source: Courtesy of HSO)
Font size:A-|A+3

The Hungarian State Opera in Budapest will present its upcoming "Carpathian Homeland Opera Tour" in Slovakia. Between February 8 and 13, in six performances in three venues, it will play national gems: the László Hunyadi opera by Ferenc Erkel, and the ballet version of famous operetta by Franz Lehár, The Merry Widow (Veselá vdova).

The opera troupe, with about 400 members including top artists, will make a full version of their stagings, including orchestra, choir, ballet ensemble, soloists, conductors and technical staffers. The operation is possible thanks to the financial support of the Hungarian government, as well as logistic support from the Slovak side, including the Slovak National Theatre (SND).

The opera László Hunyadi is the second opera by Erkel but his first real masterpiece that is often played by various opera houses, Ókovács told TASR. He added that Erkel spent some time in Bratislava, then called Pressburg/Pozsony/Prešporok. His son was the music teacher of the world-renowned composer, Béla Bartók. The opera will be performed in Hungarian, with Hungarian and Slovak subtitles.

The Merry Widow, on the other hand, a famous work by Lehár, was adapted for ballet by British choreographer Ronald Hynd in 1975 for the Australian Ballet. Ókovács stressed that despite the ballet version, all popular and famous musical pieces have been preserved.

SND representatives stressed the importance of the Hungarian State Opera, the fact that it will also perform within the Eurokontext festival on June 7, and hopefully also give guest performances in September, SND’s head of ballet section, Jozef Dolinský, told TASR.

On February 8, the opera by Ferenc Erkel will be staged in the Angels Arena in Košice; the next day the “merry ballet” will take place in the same venue. On February 10, László Hunyadi will be performed in the Milenium Arena in Nové Zámky, and on February 11, visitors there will get to see The Merry Widow.

On February 12 and 13, these Hungarian works will be offered (respectively) in the Incheba Expo Arena in Bratislava. All performances start at 19:00 and tickets – to be purchased via the Eventim ticket website – cost €10. They can be also bought at Dr. Horák in Medená 19 in the capital.