Richard Vašečka plans to get the top post in the non-parliamentary Christian Democratic Movement; Hlina welcomes him to the party. 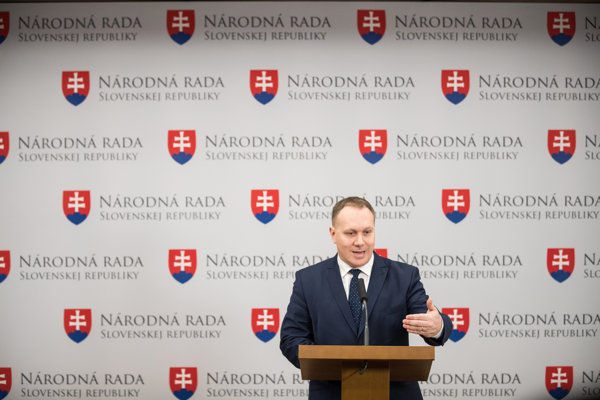 MP Richard Vašečka is leaving the Ordinary People and Independent Personalities (OĽaNO), in which he serves as head of its parliamentary caucus. Instead, he plans to join the Christian Democratic Movement (KDH) and become its chairman, the Aktuality.sk website reported on February 7.

“I don’t want speculations to spread,” said Vašečka, as quoted by Aktuality.sk. “Many people from KDH have approached me and want me. But I will not base it on the antipathy against [current KDH chair] Alojz Hlina.”

At the same time, he denied claims he was feuding with OĽaNO chair Igor Matovič.

“Rišo has surprised me with his decision, but because I’ve always trusted him, I believe he has made a good decision,” Matovič told Denník N.

The new chair of the Christian Democrats, who are currently out of the parliament, will be elected on March 17. Several KDH members, from all regions and all age categories, would allegedly like to see their party led by somebody else other than Hlina.

“That’s how I understood the situation in KDH was really serious,” Vašečka said at the February 8 press conference, as quoted by the Sme daily, adding that many parliamentary parties’ leaders have problem communicating with Hlina.

In his opinion, the movement might gain an advantage from the fact that he is already an MP, so the press briefings can be held directly in the parliament, and not in front of it.

If Hlina remains at the KDH’s helm, Vašečka will not accept any function in the party and will not run for parliament for the party, he told the press.

Hlina welcomed Vašečka to the party. He also said that every member has the right to fight for head of the party. However, he is surprised by the tone Vašečka used.

“I’m ready for a battle of ideas and want to ask him to avoid any personal attacks,” Hlina told the press on February 8.

Vašečka belongs to OĽaNO’s conservative wing. Most recently, he published a picture on his Facebook profile, depicting him, Žilina Region’s Governor Erika Jurinová and an exorcist.

“KDH is more acceptable for me in enforcing my agenda than in OĽaNO,” Vašečka admitted for Aktuality.sk.

Moreover, he has been recently introduced as shadow defence minister, Denník N wrote.

OĽaNO entered the parliament in 2016 with 19 MPs, but now it will have only 16. Apart from Vašečka, the movement was left by Viera Dubačová and Oto Žarnay, who are now members of the Spolu (Together) party, led by Miroslav Beblavý.