The company won the prestigious award in the Shared Service centers category in a respected ranking organized by the biggest and most influential Slovak job portal, Profesia.sk. 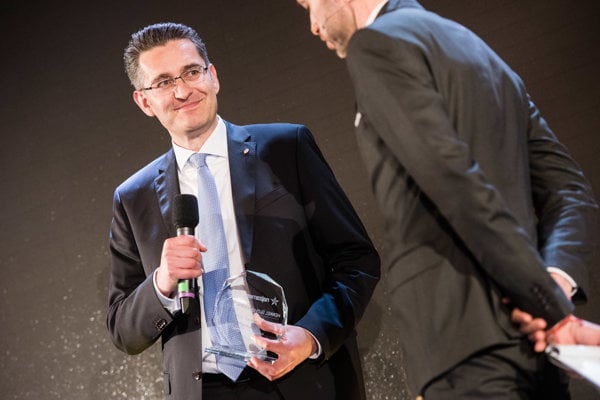 The award was received during the official RecruitRank 2017 Awards and Najzamestnávateľ 2017 gala event by Henkel Slovensko president and Head of Shared Service Center Bratislava, Christian Schulz.

“Feedback matters. We make sure to lead a discussion and listen to our employees in all aspects, from the working environment, through benefits, work flexibility, to international career opportunities. We are strongly invested in making it happen and obviously it pays off,” explained Christian Schulz on stage when asked how the company achieved this triumph.

The survey allows the public to vote for companies that attract the best people in Slovakia through fair treatment of employees and the working environment employers create. Henkel Slovensko, while 9th in size amongst SSCs, was voted the winner by the public, leaving behind competitors with many more employees. Johnson Controls International spol. s. r. o. and Adient Slovakia s. r. o. took home 2nd and 3rd place, respectively.

In the recent year, Henkel Slovensko has implemented various initiatives to enable more flexible working conditions and stronger work-life balance. Besides the recently introduced home office and additional days off, employees benefit from the company’s own Kindergarten located at the Henkel Slovensko premises. The company has a long tradition focusing on many activities, which combine corporate social responsibility with the voluntary engagement of its employees. The Sustainability Ambassadors program is one of the most beloved amongst the employees. Within this program employees teach the pupils about sustainability, one of Henkel’s core values. School visits across all of Slovakia take place during working hours. Employees are encouraged to go back to their elementary schools, meet their former teachers, and share a valuable lesson with the present students

Henkel Slovensko was founded in 1991 and currently employs 1700 people. 1500 of them are working for Henkel’s Shared Service Center Bratislava which since its foundation in 2006 has grown to be Henkel’s largest SSC worldwide.
It provides a broad range of services for Henkel subsidiaries across the globe.

I would like to thank all our employees without whom it would not be possible. I am very excited to receive the award on behalf of all of them as a sign that Henkel Slovensko is one of the best places to work. 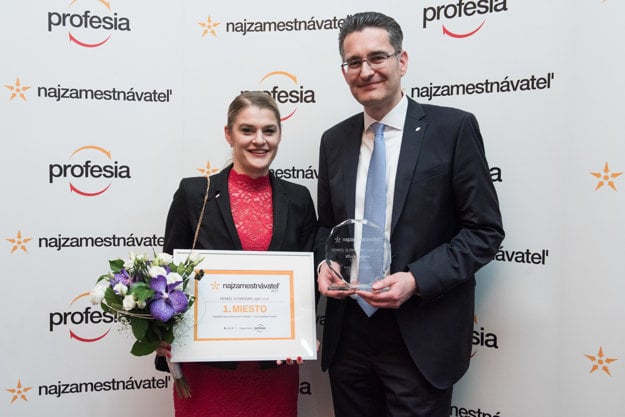 To view the full results and other categories click HERE

Henkel operates globally with a well-balanced and diversified portfolio. The company holds leading positions with its three business units in both industrial and consumer businesses thanks to strong brands, innovations and technologies. Henkel Adhesive Technologies is the global leader in the adhesives market across all industry segments worldwide. In its Laundry & Home Care and Beauty Care businesses, Henkel holds leading positions in many markets and categories around the world. Founded in 1876, Henkel looks back on more than 140 years of success. In 2016, Henkel reported sales of 18.7 billion euros and an adjusted operating profit of 3.2 billion euros. Combined sales of the respective top brands of the three business units – Loctite, Schwarzkopf and Persil – amounted to more than 6 billion euros. Henkel employs more than 50,000 people globally – a passionate and highly diverse team, united by a strong company culture, a common purpose to create sustainable value, and shared values. As a recognized leader in sustainability, Henkel holds top positions in many international indices and rankings. Henkel’s preferred shares are listed in the German stock index DAX. For more information, please visit www.henkel.com.

Henkel has been operating in Slovakia in three strategic areas since 1991. Henkel Slovensko sells more than 50 brands and, as of today, employs more than 1,600 people.