Economists see the yuan as becoming one of the world’s major reserve currencies. 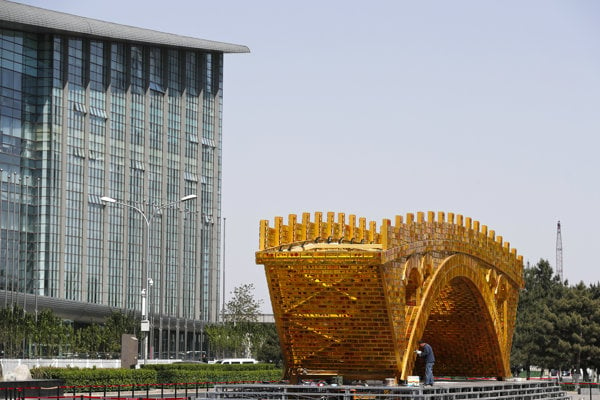 A 'Golden Bridge of Silk Road' structure outside the National Convention Center, the venue which held the Belt and Road Forum for International Cooperation, in Beijing. (Source: AP/TASR)
Font size:A-|A+5

China’s yuan currency is becoming part of the foreign-exchange reserves held by eurozone countries. Following the European Central Bank (ECB) and the German Bundesbank, Slovakia is next to include Chinese assets in its forex reserves.

“The National Bank of Slovakia (NBS) is investing part of its forex reserves in the Chinese government bond market,” said Martina Vráblik Solčányiová, spokesperson of Slovakia’s central bank, as cited by the TASR newswire.

Economists claim that the yuan is apparently becoming one of the world’s major reserve currencies, such as the US dollar or the euro.

“The 21st century will belong to China, it will soon become the world’s largest economy and thus it’s a logical step for the Bundesbank and the ECB to include the yuan in their forex reserves within their diversification strategies,” said J&T Banka analyst Stanislav Pánis, as cited by TASR.

He added that the yuan’s introduction in the Special Drawing Rights (SDR), an artificial clearing unit created by the International Monetary Fund (IMF), was a big milestone.

“Trading in yuan has been agreed-upon in many international transactions before,” said Pánis. “However, there is still a long way ahead for [the currency]. It’s enough to mention the permanently present capital checks that are a huge hurdle and are preventing the yuan from having an even more significant position.”

The ECB decided to include the yuan in its €500 million forex reserves in June 2017. Vladimír Vaňo, an economist of CentralNic group, claims this is still a relatively low financial volume given the total forex reserves and the size of the Chinese economy.

“Similar steps logically reflect not only China’s growing importance in international trade and in the global financial system, but also a gradual development in the external perception of China and the stability of its economic and financial system,” Vaňo told TASR.