When will elk return to Slovak wilderness?

Elks once populated Slovak forests in abundance. Now, there are hardly any left in Slovakia. 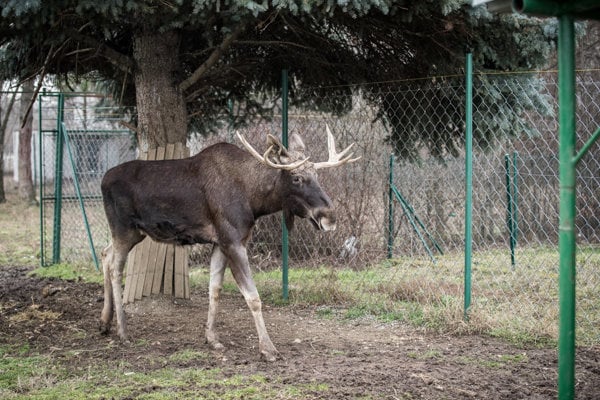 When a group of enthusiasts first tried to return elks to Slovak forests five years ago, the public was enthusiastic for a while. Few realized that the animal most commonly associated with the Arctic circle once lived in abundance right here in Slovakia.

However, our ancestors exterminated the elk three hundred years ago to alleviate poverty and hunger. Unfortunately, elks do not to run away intuitively when in dire situations; instead, they stop on the spot and start contemplating.

Since 2013, several articles have been written in an effort to return elk to Slovak forests. However, the public lost their enthusiasm and breeders came to face reality. Most of the females were lost and artificial “implanting” of elks in the forests was not successful.

In 2018, we still just talk about returning elks to Slovak forests although with the original plan, the first elk couples could have been released in the wilderness by 2017.

The enclosure in the National Food and Agricultural Centre (NPPC) in Lužianky looks empty at first but if you make a clicking sound two times and show an apple in your hand, a giant elk weighing almost half ton named Nik will walk slowly to the wire fence.

The male elk, Nik, has been in Lužianky for almost three years. He arrived in Slovakia through a project that NPPC launched together with the Žito (i.e. Rye) civic association. The project was funded through “Norway funds” totaling €4,000. 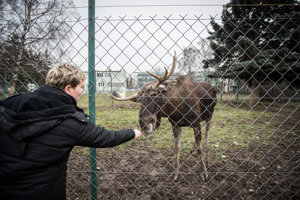 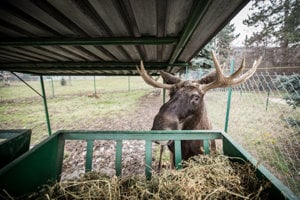 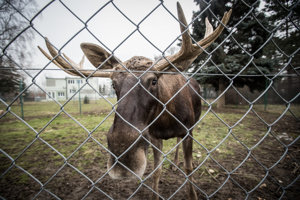 Elks in the Slovak project of restitution into wilderness (7 photos)

“The project had two goals: the first one being research of the necessities of the life of elks, in which we scrutinised what food composition they prefer,” Matúš Rajský of NPPC says. Nik likes willows and poplars most of all, while he is not interested in elderberry at all.

The visit shows that this animal is used to the presence of humans. He stands calmly near the fence, lets people take photos of him while eating a fresh oak twig now and then. It seems that you could feed him from your hand but in the last moment, Nik changes his mind.

Apart from Nik, they also had a female elk in Lužianky. During a burglary in the nearby building, however, she most probably panicked and injured herself so she had to be put down. People from the Centre hate to talk about this incident. Officers at the Regional Police Presidium in Nitra could not divulge any more details about the burglary, either.

Maybe they will come on their own

The second goal of the project, releasing elks in the wild nature, should have been ensured by the Žito civic association residing in the village of Svarín in the Liptovský Mikuláš district. In Slovakia, there are a total of three game enclosures with elks, and from one of them, elks released themselves, so to speak.

“Last May, there was a flood close to the releasing enclosure where we had a breeding couple of elks, and it knocked down the fence. The elks then fled into wilderness,” Stanislav Bystriansky, head of Žito, explains.

Thanks to the monitoring collars, they had no problem monitoring the elk couple, male Merg and female Embla, despite the fact that normally, it is usually very hard for a human to find these animals in a forest. For four months, they were doing well in the wild nature, without any big problems.

In Czechoslovakia, eyeglasses were anything but boring. Take a look