How long did Slovaks work to buy a fridge 25 years ago?

Since the launch of the independent Slovak Republic earnings have multiplied, but so have prices.

The independent Slovak Republic celebrated 25 years of existence on January 1, 2018. The Poštová Banka banking house has looked at wages and prices then and now.

“Of course, this is a very simplified view as the assessment of standards of living is very subjective and does not depend just on wages or price level,” Jana Glasová, analyst with Poštová Banka, wrote in her memo. 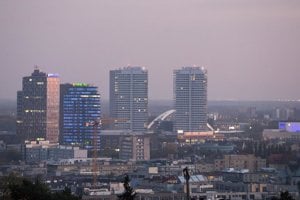 Wages and what people can afford to buy with them are stepping stones when assessing standards of living. The nominal monthly wage of an average-earning Slovak increased from 5,379 crowns (€179) in 1993 to €925 in 2017 (the average for the first three quarters of 2017). Thus, the nominal wage has increased more than five-fold.

But prices have increased too, more than three-fold. At the beginning of the 1990s, Slovakia registered double-digit inflation. In 1993, the average inflation was as high as 23 percent. During the following years, the situation de-escalated and inflation decreased to more normal levels. At the threshold of 1999 and 2000, Slovakia once again suffered from double-digit inflation, but this did not last long. Since 2005, inflation has remained below the 5-percent limit and between 2014 and 2016, Slovakia even registered deflation, i.e. the prices of goods and services decreased, wrote Glasová.

Thus, it is the real nominal wage, or nominal wage cleared of inflation, that gives a more realistic view of whether we earn more or less today than in 1993.

“At the beginning of the 1990s, our average earnings increased nominally at a two-digit pace, but due to high inflation, our real wages were decreasing,” said Glasová. “For example, in 1993 our average real wage decreased by almost 4 percent y/y.”

“This means that an average-earning Slovak can afford to buy more goods and services than they could 25 years ago,” said Glasová.

Also, an average-earning Slovak must work less to buy food and other products than in 1993.

When comparing grocery shopping then and now, the bank used a basket of food containing one loaf of bread, one package of butter, 0.2 kg of salami, 0.2 kg of cheese, 10 eggs, four cups of yogurt, 1 litre of semi-skimmed milk, 0.5 kg of fatback bacon, 1 kg of potatoes, 1 kg of apples and four beers. In 1993, it cost 214 Slovak crowns to buy all these groceries and Slovaks needed to work for six hours and 22 minutes to afford it. In 2017, it cost €16.20 and Slovaks needed to work for two hours and 48 minutes, i.e. less than half the time it took in 1993.

“We also have to work a significantly shorter time to buy electric appliances, household appliances or a car,” said Glasová. To buy a fridge, Slovaks had to work 43 days. Now, it takes nine days. In the case of TVs, the situation is similar; it used to take 57 days of work but now it only takes eight days. To buy a car in 1993, Slovaks had to work as much as three years and four months. Now it only takes one year.

The above comparison shows that non-durable goods and consumer durables are more affordable than they were in 1993.

“Prices of goods and services in shops and the level of wages significantly affect our standards of living,” wrote Glasová. “But its perception is in the large scale subjective and it is affected by many factors, for example availability and quality of goods, level of the health care and education system, the scale of the development of the real estate market and the availability of the banking sector.”