This is one of the hoaxes that appeared on the internet this past week. 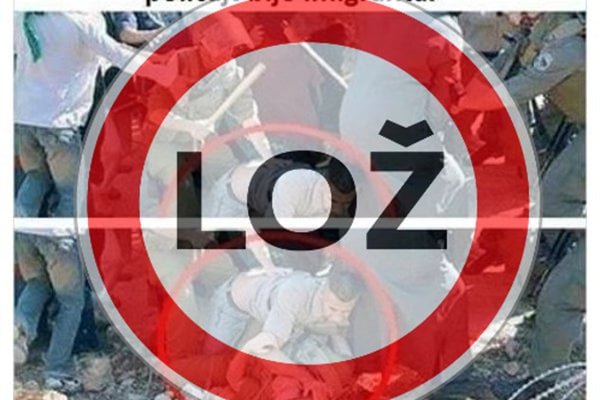 A hoax slammed the photo allegedly cropped by media, in which a police officer was beating a migrant but in reality, he was only defending his colleague who was being attacked by the migrant.

This photo, published on Facebook by Evropa Evropanům (Europe for Europeans), was shared by more than 1,100 people and received more than 500 likes. The picture tries to portray the media as a pro-migrant and manipulative organization. The paste-up itself is the epitome of a hoax, however. Even the Dezinformácie Hoaxy Propaganda / Disinformation Hoaxes Propaganda) website took notice.

Unlike videos, it is usually easy to track down the origin of a photograph; it is enough just to search for it on Google Images.

After a few clicks, it's clear the photo dates back to November 2005 and documents an incident from the times of Palestinian Intifada, i.e. the revolt of Palestinians against the state of Israel. The image comes from Ramalláh and it captures the clashes between Israeli soldiers and Palestinian protesters. Its original author is a photographer of the Associated Press newswire.

The photo has nothing to do with the migration crisis and no media have ever published it in this context.

The Facebook site, Evropa Evropanům, publishes contents typical of disinformation sources. Apart from hoaxes, it also publishes true but carefully selected items of news with negative messages towards migration and the West, and also with positive messages towards Russia, or Hungarian Prime Minister, Viktor Orbán. 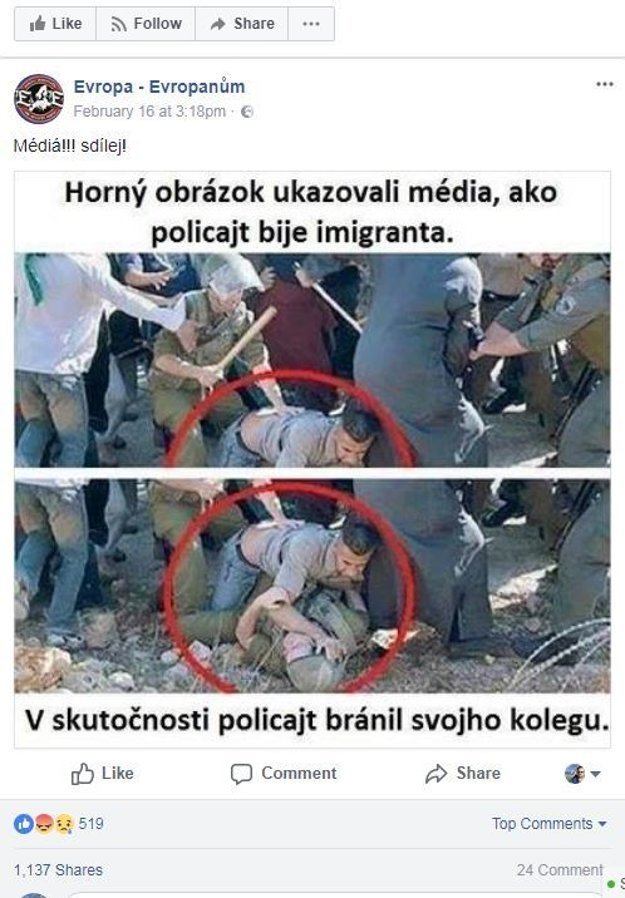 The allegedly manipulated photo is a hoax in itself. (Source: Facebook)

It also builds up its reader base by publishing click-bait articles with viral videos. According to the metrics published by the Blbec.online website, almost three-quarters of the contents comes from the Fresher.sk website.

The Sigismund of Luxemburg quote on Ottomans is a hoax

All of us Christians, however different views we may have concerning some issues of Mother Church, have one common duty: to protect Christ’s truth from Muhammadans. Followers of Allah are the biggest enemies of our faith. These are just a few sentences from a full page of text that has been spread on some internet sites.

It is the alleged address of Sigismund of Luxemburg from December 1437. The Manipulatori.cz website noticed the pamphlet, which was spread by the esoteric site, Pozitivní svět. Its text is fully fabricated, however.

A fighter against Ottomans

Manipulatori.cz pointed out that no such statement by Sigismund of Luxemburg can by found in available historical sources, such as books or internet sources. Not even the document itself states where the text can be checked.

With a specific date and place (December 6, 1437, Znojmo) the document tries to make a trustworthy impression. However, it failed the test of historical accuracy. Although Sigismund really fought against the Ottomans, his campaign did not coincide with the date of the alleged address.

On that specific day, Sigismund of Luxemburg was not in Znojmo, as claimed by the document. He was not worried about Ottomans who were the relatively far away (annexing Serbia), but rather by the conspiracy orchestrated by his wife who tried to deprive him of his throne. 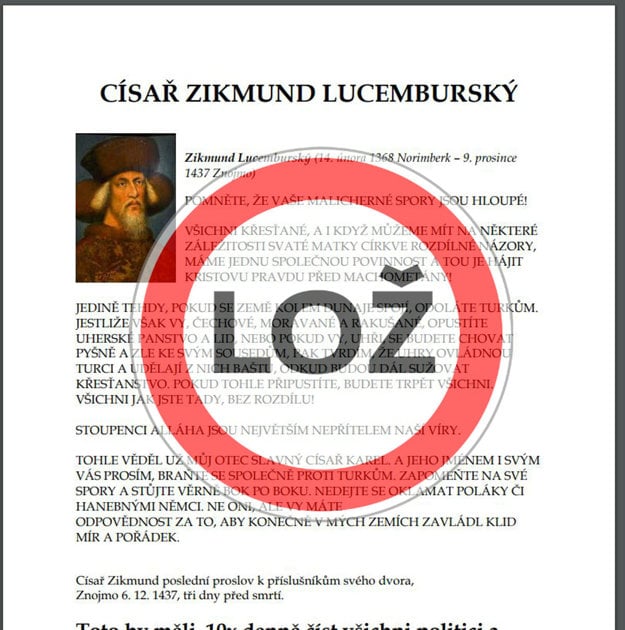 Hoax on Sigismund of Luxemburg and his anti-Ottoman speech. (Source: Manipulatori.cz)

Also, the word Muhammadans (machometáni, in Czech) does not make historical sense. And to make the defects of the text complete, the sentence “let yourselves not be tricked by Poles or shameless Germans” is unhistorical, too. The text further calls on Czech, Moravians and Austrians to cooperate mutually. “The quote does not correspond with the facts of the 15th century,” archaeologist Luboš Rypka wrote on Manipulatori.cz. “There was nothing like “Austrians” in the 15th century, and Sigismund would hardly warn against Germans, as he himself was German. By that time, Poles had rather friendly, or neutral relations with the Luxemburgs.

Thus, the fabricated address of Sigismund of Luxemburg, by mentioning “shameful” Germans, Austrians and “enemies of the faith” coincides with current times and contributes to disinformation on the migration crisis.

The fabricated texts ascribed to famous personalities are a separate genre on the disinformation scene. Disinformation websites have already spread on Facebook an “adapted” address of former Czechoslovak/Czech president. Václav Haver, or of performing artist, Jiří Suchý. Slovak actor Milan Lasica also had to disprove a totally fabricated text, and nationalist groups spread a fake statement of former US president, Ronald Reagan.