When you listen to Áron Hodek play bass, you would never guess it is only a child playing. 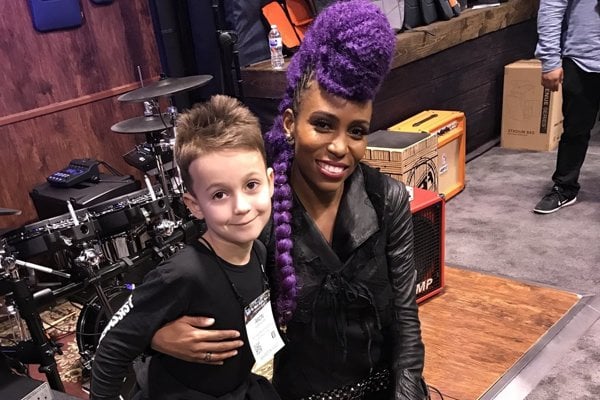 For long time, Áron Hodek was not allowed to go into his brother's room which was in the loft. He was too young and his parents were afraid he would hurt himself on the stairs.

He was three years old when he first entered the room, a bass guitar immediately capturing his attention.

“I put it down for him,” musician Dávid Hodek, now aged 20, says. “It was big but after I explained the basics of playing, he immediately started playing a simple groove,“ he recalls.

Both brothers are child prodigies and started playing their instruments early: Dávid drums and younger Áron plays the bass. Today, Áron is seven and has already played at the world music exhibition NAMM in California. His career is progressing quickly.

He has even met the band that plays for Bruno Mars and the bass guitarist Bootsy Collins, who is considering inviting Áron to his concert programme.

We went there with butterflies in our stomachs

At the NAMM show, novelties in development of music instruments are introduced every year. Firms try to improve the sound of their instruments, while music competitions and concerts take place. If you want to attend, you have to have an invitation. Áron was invited by a company producing strings and cases for bass guitars. Older brother Dávid was in charge of the whole programme; during 12-day programme, he planned many meetings and acted as manager for his little brother.

Áron was also invited to a church where he played gospel during mass, and the owner of Norman Music Store, who used to be close to legends Jaco Pastorius and Jimi Hendrix, recorded his performance.

“Oddly enough, many in Slovakia see Áron merely as “the golden kid”, while in America, many insiders from the business know him.”

“We went there with butterflies in our stomachs, but the unbelievable thing was that as soon as we entered the first music store, the first person there knew him by name,” father Szillárd Hodke recalls.

During the bassists’ competition, which took place on the exhibition’s stage, judge Bootsy Collins, a Rock’n’roll Hall of Fame musician, invited Áron onstage to help him. Where did this small boy from Komárno, Slovakia come from?

A message from Bruno Mars

“We failed to meet with Bruno Mars,“ Dávid says. “They wanted to see us but had to leave sooner, as they were preparing for their performance during the Grammy ceremony. They sent us a message.“

Bruno Mars had to leave, as he was this year’s star of the most prestigious music award. He won three Grammys in the main categories – the best album, song and record of the year.

He had already taken notice of Áron on Instagram just like many others. The boy from Komárno (aronthebassist) has 30,500 followers, 80 percent of which are from Los Angeles, including some top musicians.

On his site, Áron’s family regularly publishes videos showing his improvement. At such a young age, Áron does surprisingly well; his fingers move on the fret and he plucks the strings very naturally. Listening to him, you would never guess it was a child playing.

His videos are commented on by stars like Cory Henry who played, among other feats, at the Bratislava Jazz Days. Mars’ bassist promised he would send Áron a new instrument.

“Oddly enough, many in Slovakia see Áron merely as “the golden kid”, while in America, many insiders from the business know him, maybe because he plays jazz and blues which have their roots there,“ Dávid muses.

Áron says he loves giving concerts most of all. He performed onstage at the early age of five, while still attending kindergarten. “His first time, when he was supposed to play, he started making excuses that he had a stomach ache, but then he got over it... It happened about two times. He doesn’t perceive it as stage fright,” Dávid thinks.

Áron could follow in his older brother's footsteps. Dávid, now 20, gives concerts around all of Europe with the British saxophonist, Soweto Kinch. He played concerts in Australia and Malaysia, too, and he is very versatile. “One day, I play jazz in a club, the next day I am at the Hip Hop Žije (Hip hop is Alive) festival with Rytmus,“ he notes. 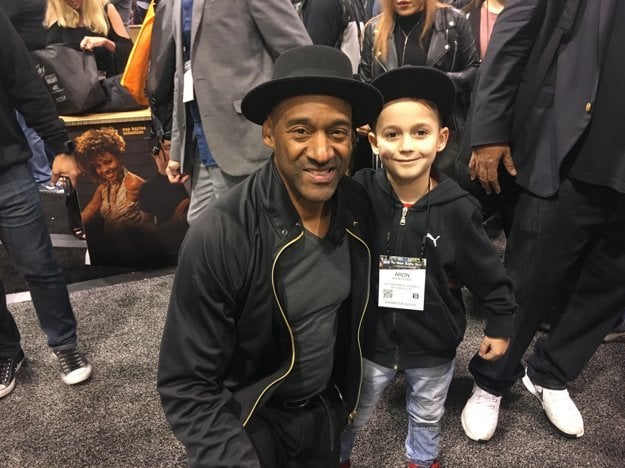 Áron could follow a similar road to stardom now that he has performed with Bootsy Collins, who used to play for soul singer James Brown. Collins is currently organising a series of memorial concerts and is considering including the young Slovak in the programme as well.