The head of the national anti-corruption unit of the National Criminal Agency (NAKA), Róbert Krajmer, arrived at the house of murdered journalist Ján Kuciak just 10 hours after the bodies were found. He did not enter the courtyard and was there for police reasons linked with the clarification of a criminal case. Police Corps president Tibor Gašpar said this on Monday, March 5, in response to statements by the opposition. He is also filling charges.

Earlier on Monday, Igor Matovič, leader of the opposition OĽaNO party, said that the police might have been eavesdropping on the murdered journalist. In his opinion this was the only way that Krajmer could have known that Kuciak was dealing with the operations of the Italian mafia in Slovakia. Matovič pointed out that on the Sunday following the murder, Interior Minister Robert Kaliňák (Smer) explained Krajmer’s presence by saying that his unit is investigating the possible criminal activities of the Italians. However, the fact that the murdered journalist was preparing an article about them only came out on the Monday evening.

Gašpar labeled the statement about eavesdropping as nonsense.

He also said, when answering a question about whether the investigation could be objective when the murdered journalist wrote articles about his brother-in-law, owner of the private security service Bonul Miroslav Bödör and about the links of Krajmer’s wife to the Bödörs, that the investigation will be objective and that it is being carried out under the strict supervision of the prosecution services. 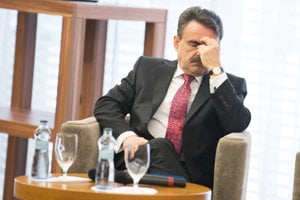 Gašpar considers the statements of opposition politicians Matovič, Gábor Grendel, Ján Budaj and Veronika Remišová, all OĽaNO, and Ľubomír Galko and Lucia Ďuriš Nicholsonová, both SaS, about the police and his personality as beyond limits. He perceives them as blackmail and false allegations and has filed charges.