Concerts and protests around Slovakia mark the end of the week

A protest against Smer-sponsored celebrations of International Women’s Day (MDŽ) and two concerts commemorating the recently murdered couple took place on March 11. Another MDŽ protest is slated for March 12th. 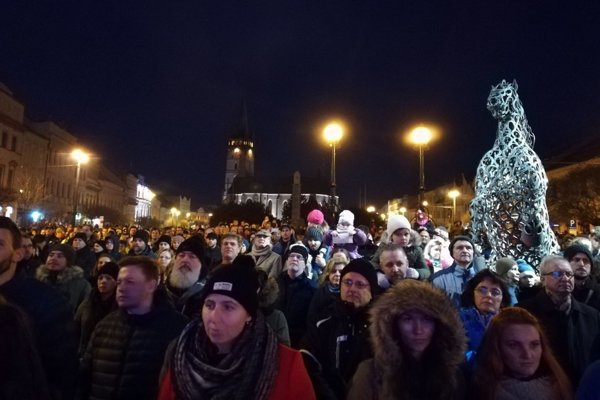 Thousands of people arrived in the Main Square in Prešov on March 11th to mark the unsolved murder of journalist Ján Kuciak and his fianceé Martina Kušnírová, who came from a village close to the eastern-Slovak city, as well as to listen to Slovak (mainly from this region) and Czech musicians and bands.

The appaluse of the 3000-strong audience, lasting for several minutes, was meant to commemorate the victims, the regional newspaper Prešovský Korzár wrote on the same day. 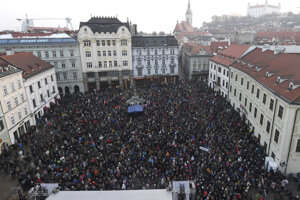 The event, that lasted from 17:00 till about 19:00, was hosted by Braňo Jobus. Klena composed a song specifically commenting on the events following the murder, called A Million Euros (hinting at a press conference of a prime minister and interior minister who put €1 million in cash on a table.)

People left the concert, attended also by the mother of the murdered girl, Zlatica Kušnírová, peacefully, to the sounds of Imagine.

Another concert took place on the same day in the city close to the home of Kuciak, in Žilina. The performers included Czech band Mňága a Žďorp, Slovak bands Korben Dallas and Para, singer Katarzia, folklore ensemble Rozsutec, and the group BASIE, Dáša Fon Fľaša and ZDŽAF. The event was hosted by Anton Šulík of the City Theatre Žilina, the TASR newswire wrote.

“The main message of the concerts is to show solidarity with the families of Martina Kušnírová and Ján Kuciak, and also solidarity with people who do care about our country,” co-organsier Michal Kaščák said for TASR. “The murder of Martina and Ján is a tragedy that deeply impacted us. Art needs freedom for its existence, and Martina with Ján died to defend freedom. We want to pay tribute to them with the concerts.”

MDŽ as a promo campaign

Although the ruling Smer party scrapped most of the annual celebrations for International Women’s Day (MDŽ) which were popular especially among elderly ladies, it did not cancel the one in Banská Bystrica, the BBonline.sk website wrote on March 11th.

On that day, hundreds of prevailingly older visitors attended the MDŽ event in the Sports Hall of Dukla Banská Bystrica, where artists like Pavol Hammel, Samuel Tomeček and the Bystrina folklore troupe performed.

However, dozens of mostly young protesters also came, with banners from the March 9th protest commemorating the murder of Ján Kuciak and Martina Kušnírová, but also with ones stating that “the Mafia gives bloody flowers to women”. They also distributed black flowers, meant to be reminiscent of the popular tradition of (mostly Smer) politicians distributing flowers among the women attending their MDŽ celebrations.

The young people also dissuaded women flocking to watch the Smer vice-chair and Deputy Prime Minister Peter Pellegrini – a Banská Bystrica native – who was the only politician to address the visitors in Banská Bystrice this time, the Denník N daily wrote.

The hall was not as full as in other years, the daily noted.

In Košice, the fear of protests led organizers to cancel the MDŽ celebrations but this turned out to be in vain as only two activists arrived on March 8th, the Korzár daily wrote, and they hardly represented any security threat.

In the western-Slovak town of Senica, the MDŽ celebrations organized by Smer for the afternoon of March 12th will collide with the Za Slušné Slovensko (For a Decent Slovakia) protest gathering, the SITA newswire wrote.

The celebration, planned to take place in the House of Culture at 17:00, was condemned by the organisers of the protest.

“In no way do we want to insult women and their MDŽ holiday but any celebrations of the ruling Smer party are immoral,” the organisers wrote on the invitation to the protest, adding that “Prime Minister Robert Fico and Interior Minister Robert Kaliňák [who has now resigned - ed. note] by no means represent the values which thousands of Slovaks stood for on Friday, March 9th, and thus, we continue civic meetings and call on all citizens to join us and persevere”.