Prime minister will face a no-confidence vote in parliament, on March 19 morning. If he is toppled, the whole cabinet will be dissolved.

Prime Minister Robert Fico will face a no-confidence motion at a special parliamentary session to be held on Monday, March 19 at 9:00. If Fico is recalled, the whole government would fall, the TASR newswire wrote.

The date of the opposition-initiated extraordinary session has been set by Speaker of Parliament Andrej Danko (Slovak National Party/SNS). 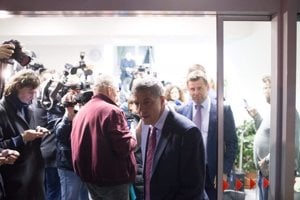 The motion to express distrust in the prime minister and thus in the whole cabient was launched by the murders of investigative journalist Ján Kuciak and his fiancée Martina Kušnírová and after Kuciak’s unfinished story was published where he writes about the governing politicians’ alleged ties with the Calabrian Mafia.

The opposition stated it no longer trusts in the prime minister and in the government.