America takes another step toward the abyss 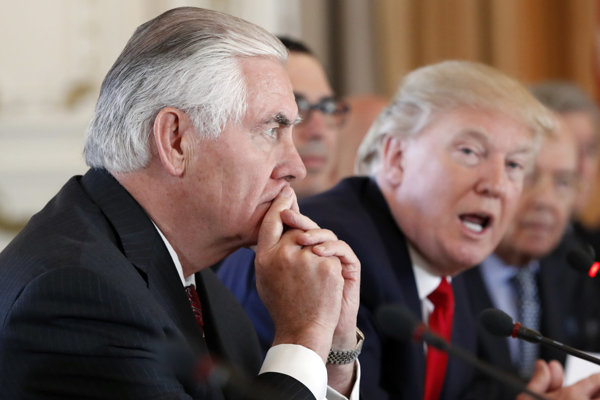 In another instance of “the more we learn, the less we find that differentiates our corrupt governments”, US Secretary of State Rex Tillerson has been fired by President Donald Trump – apparently for agreeing with his UK allies that Russia was responsible for attempting to murder a fugitive Russian double agent and his daughter in England with a Russian-developed nerve agent.

The firing – and Trump’s specious explanation of it – is the latest evidence that the Trump White House is determined to shield Vladimir Putin’s Kremlin from international condemnation of its atrocities. Even when the entire US-UK intelligence establishment believes that Putin is exporting terror, and is doing so brazenly, precisely to divide the Western alliance against him.

It is difficult to understand such dishonesty by the Western hemisphere’s most powerful democratic leader. In Slovakia, where a European drug arrest warrant has been issued for a business associate of the prime minister’s girlfriend – and the prime minister is still scurrying between allies to avoid his inevitable defeat – America’s agony will seem only too familiar.

But Bratislava, for all its venal shenanigans, is not Washington, where a president’s inexplicable lunacy is eroding the alliances that hold the world together.

Rex Tillerson, remember, was chosen for the job of US foreign minister precisely because his previous gas deals with Russian state companies had promised Trump a Putin-friendly outlook. He was chosen after an anti-Putin candidate, Mitt Romney, was initially courted by Trump and then humiliatingly discarded because Moscow objected (the coup de gras was a disastrously compromising photograph of a nauseous Romney grinning beside a triumphant president over a dish of frog’s legs).

Now, not even Tillerson, it seems, can satisfy Trump’s need to abase his country and his presidential vows before Putin. To deny not only the evidence of murderous intent that Moscow intended should be found – along with cynical sabotage in Syria, and election-rigging in America – but also to muzzle the only verdict a country that is not Russia’s vassal could issue: That Putin did order these chemical attacks in England, that he meant to be discovered, and that through Trump he rejoiced in throwing sand in the eyes of the West.

In Slovakia we can at least see Fico’s end written on the wall, and along with it his oligarch-friendly and gangster-indifferent government. But in Washington, corporate money and capitalist cynicism has long corroded the last defenses of a democracy that didn’t have even a 1989 and an outraged public to arrest its descent.

Henceforward, a lapdog CIA director will conduct America’s foreign policy. We may find ourselves lamenting even oil-boss Tillerson, and his threadbare commitment to liberal democracy.