Blog: The promise we must make

While covering this month’s protests in Bratislava, I had a feeling of déjà vu. They reminded me of last year’s protests in Romania. 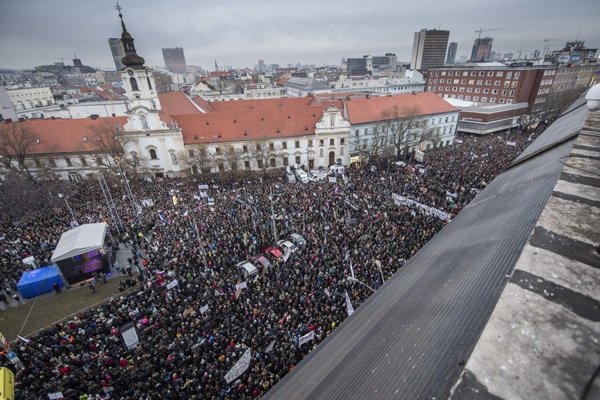 I have said it openly from the very start: I have always found Slovaks to be quite passive. Proactive behavior in sports or business in Slovakia is mostly the effort of individuals (and their parents) rather than the result of a common, organized and sustained effort of society. It has always been a mystery to me that such a small country bragging about its Christian values can in fact be so fragmented; where you are from still plays an important role in Slovakia. Now Slovaks seem rather surprised that they managed to come together and fill central squares in Bratislava, Košice and many other localities. It’s long overdue and it’s terribly sad that it happened only after a murder took place.

I've covered nurses and teachers’ protests in the past three years and remember how only a handful of people joined them in downtown Bratislava. Nurses even camped in front of the Government building dressed in old fashioned “uniforms” so highly visible to everybody. Many people passed by as if the shortage of nurses had nothing to do with them and was a problem in another galaxy. Some even mumbled that teachers have long holidays so they have no reason to complain. People in healthcare told me more people did not join nurses or teachers because they were afraid. Afraid of what exactly? Of losing one’s job? Given the already chronic shortage of staff on the labour market in Bratislava, especially in healthcare and education, I have a hard time understanding why people would be afraid of being fired for supporting these protests.