Russian diplomats have increased their intelligence activities as well according to Czechs. 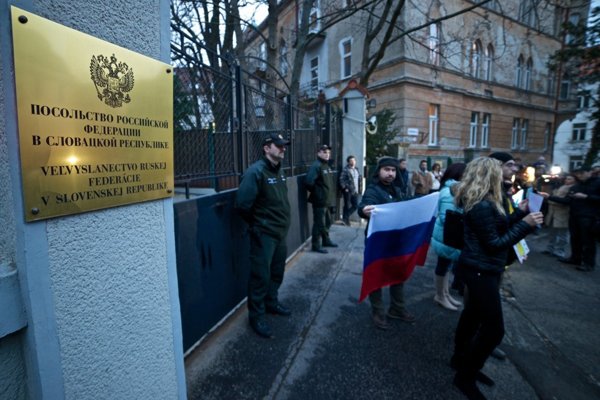 Protest in front of the Russian embassy in Bratislava (Source: TASR)
Font size:A-|A+9

British daily The Guardian called it the “coalition of the unwilling”. Eight European-Union countries decided not to expel any Russian diplomats in reaction to the poisoning of the former Russian spy, Sergei Skripal.

Everything suggests that the Russians are behind the nerve agent attack, according to the UK.

So far, Slovakia has reacted by summoning the Russian ambassador, while President Andrej Kiska summoned the Foreign Ministry’s state secretary Lukáš Parízek. His explanations are not found to be sufficient, though.

Expelling one or two people, like Hungary or Denmark did, would not significantly impact the operation of the Russian Embassy in Slovakia.

The data of the Foreign Ministry shows that there are currently 34 Russian diplomats with official accreditation in Slovakia. These figures do not include non-diplomatic embassy staff.

Russia also has the most diplomats in Prague