The D1 highway will be finished in 2026 at the earliest

The original deadline for finishing the D1 highway, 2020, has long been unrealistic. 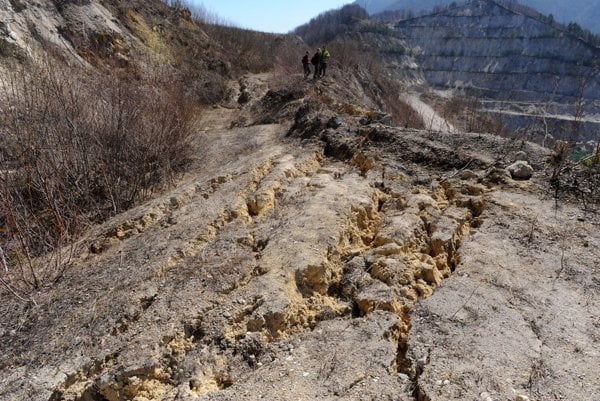 Landslide during construction of the highway near Šútovo in 2013. (Source: TASR)
Font size:A-|A+

The D1 highway between Bratislava and Košice will be completed in 2026 at the earliest. The ultimate date depends mostly on when the construction of the most difficult and troublesome section, the Turany – Hubová (13.5 kilometres long), will start.

In the best case scenario, the construction should begin in 2021, and last for five years. This is the last D1 section between Žilina and Ružomberok which has not had a tender and construction has not even been launched. Due to a landslide, it will be built along a new route, including the tunnels Korbeľka (5,868 metres) and Havran (2,820 metres), the Transport Ministry and the National Highway Company (NDS) confirmed for the SITA newswire.

The current cabinet of Prime Minister Peter Pellegrini (the ruling Smer party) which took over the programme Manifesto without any updates, still states the deadline for completion as 2020. However, this was already unrealistic when the cabinet of resigned PM Robert Fico was inaugurated two years ago. Fico first mentioned the completion date of the D1 in 2010; former transport minister Ján Figeľ (KDH) and Ján Počiatek (Smer) talked about the years 2017 and 2019, respectively.

“Transport Minister Arpád Érsek was the first minister that publicly admitted the 2020 finishing date for the D1 highway was unrealistic and specifically named the delays in building the D1,” the ministry wrote to SITA at the end of March.

All D1 sections between Bratislava and Košice, apart from the Turany – Hubová section, are under construction but they are usually delayed and several will not be complete by the original date agreed upon in the contract. At least two more D1 sections will not be ready by the end of 2020.

The course of preparation and construction on several highway sections have been impacted by unexpected geological incidents and also by past decisions, according to the ministry. Near Ružomberok, an unexpected landslide on the future route of the highway stopped the building, but this spring, activities should restart there, the ministry reported, adding that on the not-yet-built section Turany – Hubová, the vast landslides even forced NDS to reroute the highway and open a new tender to include a long highway tunnel, Korbeľka.

If everything, i.e. the assessment and approval procedures go well, the expected start of construction is 2021 and the date of completion is 2026, the ministry wrote, as cited by SITA.

The OZ Triblavina civic association demands that the government adopts adequate measures for all suspicions of criminal activities during the construction of highways be investigated and legal responsibility be applied. OZ Triblavina cites the open letter of anonymous NDS and Transport Ministry employees from May 17, 2016, which warned about grave facts that have caused the delays in expanding the D1 highway, building the Triblavina highway junction, the Višňové tunnel, and other constructions,” Triblavina’s chairman Milan Grožaj informed SITA.

In this matter, Grožaj addressed the current Prime Minister Peter Pellegrini, Interior Minister Tomáš Drucker, Transport Minister Árpád Érsek, General Prosecutor Jaromír Čižnár, Police President Tibor Gašpar and Bratislava regional governor Juraj Droba. The facts mentioned in this letter have so far not been checked at all, and the people named still work in their positions or have moved to other functions in public- and self-government administration, Grožaj noted, as quoted by SITA.