Kia reaches an agreement on salaries

Apart from salaries, the employees will also receive more for night shifts. Some will even receive one extra day off.

The employees of Žilina-based carmaker Kia Motors Slovakia will receive €220 on average increases in their monthly salaries. This stems from the final agreement made on April 17 between the company’s management and the representatives of the trade unions organisation.

At the same time, the administrative employees will see their salary increase by 7 percent on average, both in 2018 and 2019.

In addition, all employees will receive a €100 Christmas voucher from the social fund, both this year and next.

The agreement is important

“We’re glad that after months of difficult negotiations, both parties reached an agreement that is acceptable for both the employer and the employees’ representatives,” said Dae-Sik Kim, CEO of Kia Motors Slovakia, as quoted in a press release.

He stressed that the agreement is extremely important as the carmaker is launching the production of a new key model, while the whole market is witnessing the dropping interest of customers in vehicles with diesel engines. 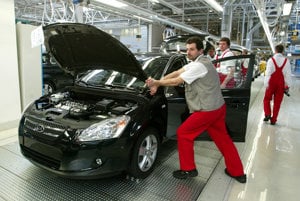 “On one hand, it enables the company to secure the plant’s future in the environment of increasing competition, while on the other hand, it offers employees stability and security of above-standard salary increases,” Dae-Sik Kim added.

Miroslav Chládek, head of the trade unions’ organisation in Kia Motors Slovakia, believes that the agreement will be acceptable for the carmaker’s employees.

The trade unions managed to agree on a similar increase in salaries as they did in 2017. Apart from the increase in their basic salaries and higher bonus for night work, the employees working for the carmaker for more than five years will receive one extra day off.

“I leave the employees to evaluate the result of the collective negotiations,” Chládek said, as quoted in the press release.