The Bodva river is clogged with bottles

Thousands of plastic bottles clog the Bodva riverbed every year. Locals think that putting deposits on PET bottles would help. 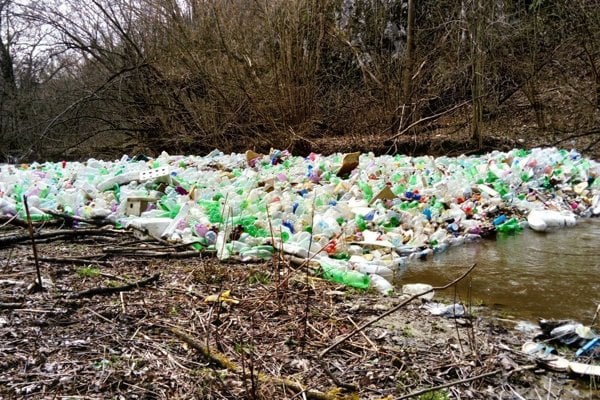 To see the true island of plastics, people do not need to travel to the Pacific: the Bodva river, just a few kilometres behind the town of Moldava nad Bodvou towards Jasov, is covered in plastic.

“You can find this here every year,” Branislav Jánoš of the Bodva sports club told the Sme daily. “When the snow starts melting in spring and the water level rises, Bodva washes off all the waste dumped on its banks.” His sports club enjoys kayaking, so he pointed out the huge pile of waste in the river on Facebook.

The cluster of plastic bottles in Bodva is more than 10 metres long and covers the whole width of the riverbed. In mid-March, the situation was even worse, according to Jánoš, as strong rains washed some of the bottles away, to Hungary. He added he cannot imagine how this can be cleaned, as the river is dirty and could be dangerous due to waste pollution.

The Roma settlement in Jasov is perceived as the true culprit in this case, but the situation is similar in other villages up the stream – Štós and Medzev where the Roma settlements are located close to the river. Their inhabitants are reluctant to separate waste.

After the Environment Ministry got involved, it decided that municipalities have to clean the waste, according to Sme.

In Jasov, mostly volunteers helped with the clean up but local fishermen also promised to lend a helping hand.

People involved agree that it would help if the PET bottles could be returned for money. This would be motivating, especially for socially disadvantaged groups.

Expert on behavioural economy, Matej Šuchu, agrees, as cited by Sme, and adds that the system of buying bottles back has to be as simple as possible so “people will get used to it quickly,” he opined.

Unlike Slovakia, plastic bottles have long been put under deposits in many countries like the Scandinavian states, Germany, and Croatia. In Slovakia, less than 51 percent of used plastic bottles were recycled in 2016, and the government does not consider any deposits when selling them.

The ministry is mainly focusing on projects securing a higher level of waste appreciation, better recycling, and the use of composters.

The Romanian company Green Group wants to build a plant for processing PET bottles and mixed plastics. It plans to process 30,000 tonnes of plastic bottles with added value, producing from them, for example, car parts. The ministry announced the investment in autumn 2017 but it is not clear yet where the plant should stand and when it should be constructed, Sme wrote in mid-April.

Thank you for singing up. Shortly an email will be sent to the address you provided to verify your e-mail.
Error! Please try to register again later, your e-mail was not registered.
Your email is not in a correct format.
Please confirm you are not a robot.
Share on Facebook (67)