Shipping season on the “Liptov sea” has officially begun

On May 5, “shipping season” was opened for the first time at the Liptovská Mara dam, which contains the first public lakeside marina in Slovakia. 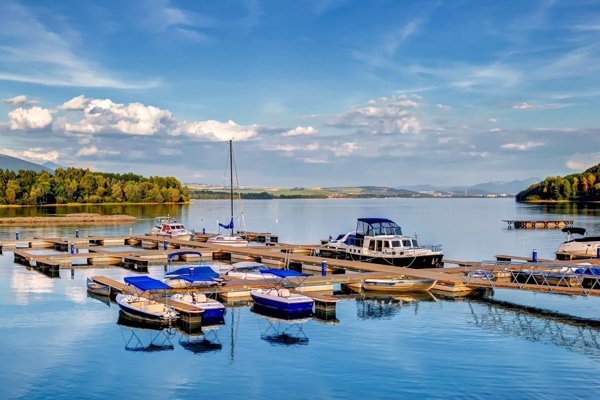 The biggest man-made water dam in Slovakia, Liptovská Mara, opened for shipping season on Saturday, May 5 at 14:00, with a symbolic untying of a rope on the surface of the “Liptov Sea”, the TASR newswire wrote.

Liptovská Mara has served as the first public lakeside marina in Slovakia, with facilities for boat and water-sports lovers, for almost two years, spokesperson of the Area Tourism Organisation (OOCR) Región Liptov, Katarína Šarafínová, told TASR. The first professional harbour lies in the Bobrovník locality. “There is enough water in our region which attracts holidaymakers all-year round,” chair of the OOCR board, Ján Blcháč, noted, adding that Liptov is famous for its white-water, thermal and mineral springs but what gives it the flair of a seaside resort is Liptovská Mara, the biggest water reservoir in Slovakia.

The start of shipping season included a symbolic untying, goulash cooking, and a concert by the Vesna folklore ensemble from Žiar.

Marina Liptov was opened in summer 2016 as a unique holiday and leisure resort in the region, OOCR Región Liptov head Darina Bartková told TASR. She added that visitors can use some services with rebates, thanks to the Liptov Region Card, which also helps collect “loyalty points” that can be used for future visits to Liptov.

The Marina Liptov jetty is 2,000 square metres and is composed of two parts, a fixed pier and a floating pier. The fixed pier contains a sports centre with a grill bar; while the floating pier serves for anchoring boats and ships, and rentals. A total of 50 parking places are available and can be rented from May 1 till October 30, 2018, according to TASR.