Hoax: George Soros made it rain sand in Europe 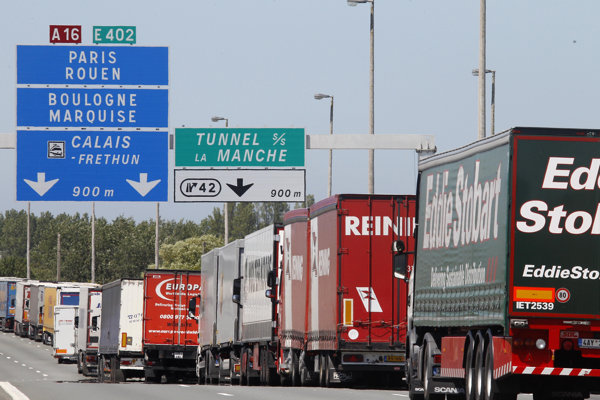 The dramatic photo spread recently on Facebook by Pavel Tobiáš' account depicts a highway leading to the French port of Calais, on which the huge cloud of smoke is described as “doctors, scientists, lawyers and managers from developing countries celebrating the arrival of Spring”.

Pavel Tobiáš is probably a Nymburk-based member of the Czech political party Národní Demokracie (National Democracy) whose profile is full of xenophobic and anti-European posts.

Tobiáš used a photo from Calais but wrote that it was taken in Paris, and even added a date – April 19, 2018: The picture got more than 2,440 shares and was even shared by the Slovak party Otvor Oči, Slovensko (Open Up Your Eyes, Slovakia) which secured even more interactions.

Tobiáš complains that “mainstream media” kept silent about the photo, but the photo is fake. In fact, the photo was found on Google images on the UPL.com server, which took it over from the Twitter account @vtellier.

The photo really comes from Calais and dates back to July 2015. However, the event itself had nothing to do with immigrants. The picture captures a strike of French employees of the company operating ferries between France and the UK. The employees protested against budgetary cuts by blocking the entrance to the Eurotunnel connecting these two countries with tyres that they set on fire.

They were not immigrants, it was not Paris, and the protest had nothing to do with the current French President Emmanuel Macron as the Czech Facebook post claims.

A photo with brief text is a very effective tool on social media: it does not require as much attention as other stories. The problem is that old pictures often get a new use and are paired with fake background stories and incorrect dates and locations.

The Czech server Parlamentní Listy even tried this with a video taken in February 2017, which closely resembled the Calais photo. The burning tires and clashes with police were attributed to the migration crisis. However, the recording was one year old and described the protest of Paris taxi drivers. Parlamentní Listy were secretive about the photo's background, simply stating “This Is Paris”.

Sand can be magnetic, even without Soros

The Ružomberok branch of the extreme right party ĽSNS and the Facebook site Chemtrails Slovensko claimed that the sand of the Sahara which recently plagued Europe, including Slovakia, was reacting to a magnet. “Thus, the questions arises what the dust plaguing Slovakia really contains?” ĽSNS asked. It took samples in various places in the country and sent them to experts in laboratories for analysis.

At that time, the most successful video on the conspiracy scene, according to the blbec.online website, was a video from Italy whose author also analysed the sand brought by rain to Europe in April. The video also spread thanks to Slovak Facebook group, Chemtrails Slovensko.

It is not nature – but it could be

Meteorologists explain that the rain mixed with Sahara sand was caused by the depression that deepened in northern Africa and moved, with clouds, through Italy to northern Europe, partially hitting Slovakia. Experts say this is nothing unusual: if a sandstorm in the Sahara is connected with strong south-western airflow, the storm brings the fine sand into the atmosphere and the south-western wind takes it all the way to sovereign countries in unwitting Europe, where it falls with the rain.

The second mystery, the magnetism, is due to the composition of rocks in the region where the sand has originated, as it is the result of the erosion of minerals and rocks. Thus, the sand on the Croatian coast is different than the sand in Šajdíkove Humence, a landlocked village in Slovakia which has different sand, again, from the Sahara.

If the ground in the place where the sand originated contains rocks that include, for example, cobalt, nickel, or iron, it's entirely possible for the sand to react to a magnetic field.

Ironically, both the ĽSNS members and the author of the Chemtrails’ video tested the sand on the metal roof of a car.

The Sahara sand case evoked the Occam’ razor – a principle which states that when presented with competing hypothetical answers to a problem, one should select the one that makes the fewest assumptions. This implies that when facing sand magnetism, we should prefer the simple and satisfying explanation in line with the laws of nature. However, some still gravitate toward explanations that involve mysterious factors and actors like George Soros, who allegedly manipulated the Sahara sand.