The two months that have passed since the murder of a journalist and his fiancée have shown that there is a strong civil society in Slovakia. 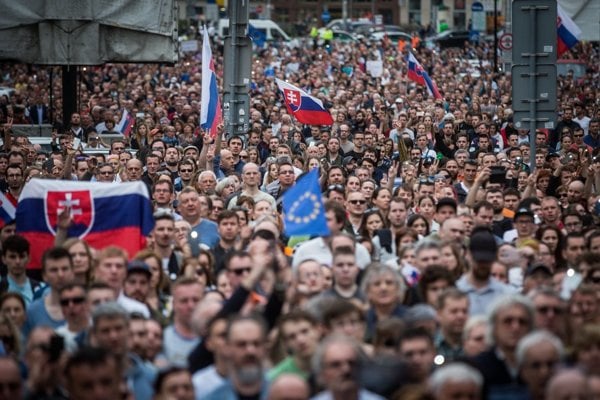 It should have been a normal, cold, February, Monday morning. The spring holiday was reaching its climax and many people, including the Slovak President Andrej Kiska had gone for a skiing holiday. At 8:30, Defence Minister Peter Gajdoš (an SNS nominee) explained in the ministry hall why the Slovak army had suspended the operation of its Mi-17 helicopters.

During this briefing, information that deeply hit many people around Slovakia and impacted the whole country considerably, leaked to the public. Investigative journalist Ján Kuciak and his fiancée Martina Kušnírová had been murdered.

It happened in the house they were renovating, in the village of Veľká Mača, in the Galanta district, which is almost totally under the surveillance of street cameras. Despite this and after two months of investigation the murderer has not been found. However, those three shots caused one of the most turbulent periods the independent Slovakia has experienced in its 25 years.

A few hours after the public first learned about the double murder, Police President Tibor Gašpar told a press conference that the crime was very probably connected to Kuciak’s work. Kuciak wrote mainly about the ties between oligarchs and politicians but also about people from the strongest ruling party, Smer. It was his unfinished story, published shortly after the murder, which pointed to the connection between the assistant of the then-prime minister Robert Fico, Mária Trošková, and the head of the Security Council Office, Viliam Jasaň, and people suspected of being members of the feared Italian mafia, ’Ndrangheta.

Even though both Trošková and Jasaň promptly declared they would leave their positions until the investigation was completed, the coalition crisis deepened and the coalition partner, Most-Híd started hinting that Smer vice-chair, Robert Kaliňák, could not remain in the position of interior minister. Gradually, it began to look as if even this change would not be enough for Most-Híd.

Protesters had repeatedly demanded that Kaliňák, Fico and Gašpar, leave their posts, the most recent being the anticorruption marches organised by students in the summer of 2017 which, however, failed to bring results.

The difference now compared to previous meetings was that the murder of two young people brought tens of thousands of people to the streets, for several consecutive weeks. Finally, the culture minister Marek Maďarič resigned, followed by Robert Kaliňák and shortly afterwards Robert Fico succumbed to the pressure.

“It seems some of the perennial stars of Slovak politics have left for good – which is a significant change,” says political analyst Grigorij Mesežnikov. “But from the point of view of governance and power performing style, no change has taken place.”

“The idea of several weeks ago, that Slovakia will solve its problem with the oligarchs, was a vain hope,” thinks sociologist Michal Vašečka. Many people perceive the governmental changes as mere cosmetic adjustments.

“It must be stressed that the demands of part of our society are oriented towards change in political culture, style of politics and a strong anticorruption agenda,” ex-PM Iveta Radičová says. So far, she sees no such changes.