Slovakia’s representatives are concerned about the future efforts to fight the development of nuclear weapons as well as the impact of a potential reintroduction of sanctions. 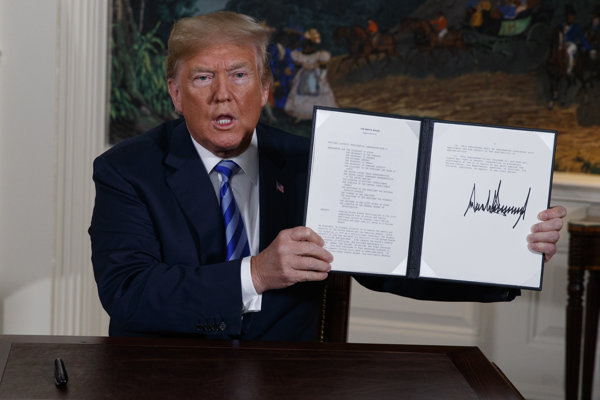 US President Donald Trump shows a signed Presidential Memorandum after delivering a statement on the Iran nuclear deal from the Diplomatic Reception Room of the White House on May 8, 2018, in Washington. (Source: AP/TASR)
Font size:A-|A+

Slovakia is concerned about the decision of the United States to withdraw from the Iran nuclear deal and re-introduce the sanctions against Iran. The country will coordinate its next steps with the partners from the European Union, with the aim to keep the deal, the Slovak Foreign Affairs Ministry informed.

“We’re still convinced that the Iran nuclear deal confirms the efficiency of international diplomacy when solving security challenges concerning the non-proliferation of the weapons of mass destruction and that the deal still fulfills its aim to guarantee the peaceful character of Iran’s nuclear programme,” said ministry’s spokesperson Peter Susko, as quoted by the TASR newswire.

The fact that Iran is meeting its nuclear commitments has been repeatedly confirmed by the International Atomic Energy Agency, he added.

The doubts on the agreement’s efficiency were the reason why US President Donald Trump decided to withdraw from it on May 8, claiming that “it didn’t bring calm, it didn’t bring peace, and it never will”.

Meanwhile, State Secretary of the Foreign Affairs Ministry, Ivan Korčok, called on the remaining countries to continue in the deal.

“We’re also calling on Iran to restrain from any immediate steps to respond to the US and I hope that in a certain way the deal will meet its commitments without the US,” Korčok said, as quoted by TASR.

In his opinion, Trump’s decision will have a significant impact on the whole efficiency of the deal. Moreover, it has a broader context because the deal is an important element of control and non-proliferation of nuclear weapons.

“We know very well that at this moment there is a proposal to make the Korean peninsula get rid of the nuclear weapons,” Korčok added, as quoted by TASR.

The opposition parties Freedom and Solidarity (SaS) and the Ordinary People and Independent Personalities (OĽaNO) do not consider Trump’s decision wise. They are afraid of the consequences of the economic sanctions against Iran, mentioning also the effect on Slovak companies, as reported by TASR.

The nuclear deal was signed by Iran, the United Kingdom, China, France, Germany, Russia and the US on July 14, 2015. Subsequently, the sanctions imposed by the UN, EU and the US against Iran were cancelled, in return for the promise that Iran will restrict its nuclear programme that was, according to the West, focused on developing nuclear weapons.

The deal is valid until 2025, but some parts including the strictest controls carried out by international observers are expected to take place until 2040, TASR reported.