A document that established the connection between Czechs and Slovaks within one state later became a tool of fascist propaganda in Slovakia. 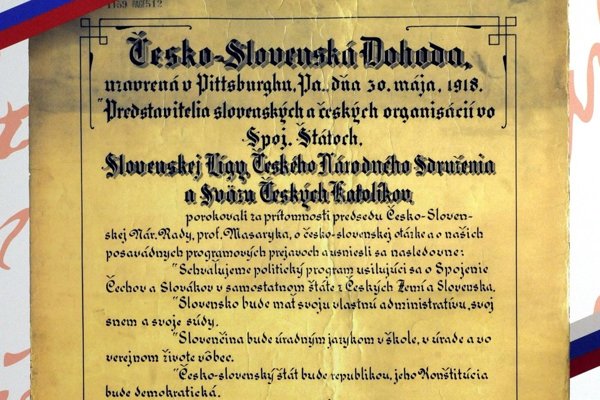 As the 100-year anniversary of the founding of Czechoslovakia approaches, there are several significant events that preceded the establishment of the state. One of them is the Pittsburgh Agreement, a document approving the integration of Czechs and Slovaks into a single nation.

The Pittsburgh Agreement was signed on May 31, 1918 by Tomáš Garrigue Masaryk, who later became the first president of Czechoslovakia and by the deputies of the Slovak League in America, the Czech National Association and the Union of Czech Catholics.

“The founding of Czechoslovakia was key for Slovak existence,” said Tomáš Jahelka, a political scientist from the University of Trnava, adding that Slovaks could finally develop and live freely.

On the eve of Czechoslovakia

Under the Pittsburgh Agreement, Slovakia was to have its own administration, assembly and courts within the common state. Slovak was to become the official language in schools, public offices, and in public life overall. The agreement established that Czechoslovakia was to become a republic based on a democratic constitution.

Many Czech and Slovak expatriates lived in the US in the early 20th century. They were politically conscious and active citizens, and they cared about the fate of their homeland.

“Large communities of Czechs and Slovaks living in Pittsburgh developed and took part in political, social and cultural activities,” explains Ivan Kamenec, a historian from the Slovak Academy of Sciences, for The Slovak Spectator.

By the time the Pittsburgh Agreement was signed, the plans to found a common state of Czechs and Slovaks had taken a very concrete shape, be it in the field of diplomacy, foreign institutions like the Czechoslovak National Council and the combat activity of the Czechoslovak legions, Kamenec said.