He was recognised for his investigative work on tax fraud among businessmen with links to top Slovak politicians.

Murdered Slovak journalist Ján Kuciak became one of the first laureates of the award for ‘Journalists, Whistleblowers and Defenders of the Right to Information’, granted by the European United Left/Nordic Green Left (GUE/NGL) European Parliamentary group.

He received it together with LuxLeaks whistleblower Raphaël Halet from France. Both journalists were rewarded for their work and their courage in exposing corruption and wrongdoing by the powerful. 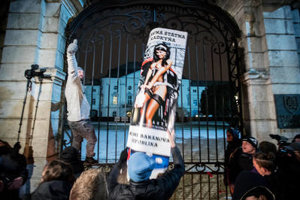 The award was granted this year in honour of another murdered journalist, Daphne Caruana Galizia of Malta.

Kuciak was posthumously recognised for “his investigative work on tax fraud among businessmen with links to top Slovak politicians”. His murder in February 2018 led to the resignation of the Robert Fico government, as GUE/NGL informed on its website.

Halet of LuxLeaks, alongside Antoine Deltour, is a former PwC employee. He helped leak the documents that exposed multinational tax evasion in Luxembourg. He remains on trial for the exposé, according to the website.

The award comes with a subsidy of €5,000, the TASR newswire reported.