At the Parliamentary Assembly of the Council of Europe, he also answered questiones about migrants, Ján Kuciak and the resignations of RTVS reporters. 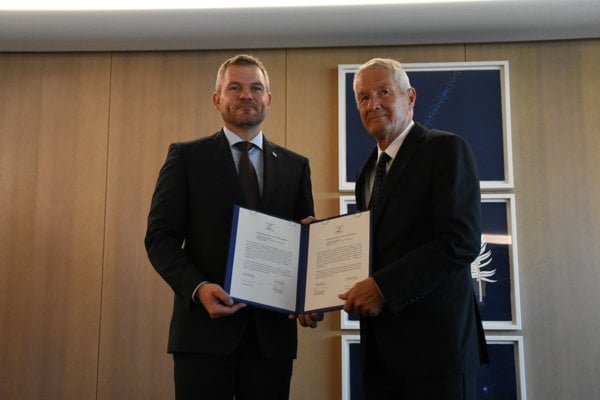 Twenty-five years ago, when Slovakia became an independent country, it was primarily the Council of Europe that helped us build the foundations of statehood and parliamentary democracy in accordance with the principles of the rule of law and respect for fundamental freedoms and human rights.

Protecting human rights, peace, and democracy, these are the goals for which the Council of Europe was established nearly 70 years ago, Slovak Prime Minister Peter Pellegrini said in his speech at the Parliamentary Assembly of the Council of Europe (PACE) on June 27, as quoted by the SITA newswire. We have to be constantly reminded of these values, as they are considered to be a matter of course rather than a privilege.

“The Slovak Republic is honoured to be among the countries that have this privilege,” he continued. “The fulfilment of sometimes not very easy obligations arising from membership in the Council of Europe has allowed us to achieve a high degree of democracy in a relatively short time since the rise of an independent state in 1993.”

The prime minister talked primarily about human rights, and corruption. He appreciated the work of the Venice Commission and reminded that last year, it helped Slovakia solve a problem with constitutional judges.

“The Council of Europe greatly helped young European democracies by being strict and resolute,” the Slovak PM also noted, as cited by SITA. “The fact remains, unfortunately, that where the Council of Europe has looked the other way, today, there are more problems than in countries where more stringency was applied.”

Pellegrini added that the new members were a contribution to the organisation that started losing dynamism after the collapse of the Iron Curtain.

In a discussion with PACE members, the Slovak PM mentioned, for example, the fact that Slovakia provided accommodation to Austrian asylum seekers.

Pellegrini was also asked about the murders of Ján Kuciak and his fiancée Martina Kušnírová and the freedom of the press in Slovakia. He said that one of the biggest investigation teams in Slovakia’s history has been working on Kuciak’s murder (still unexplained since February), and that the country was cooperating with international investigators and police forces from other countries. According to Pellegrini, the Slovak police are now acting more resolutely in cases where journalists might be threatened. He added, as cited by TASR, that his aim is to have any murder investigated and, in Kuciak’s case, to catch the perpetrators of this abominable act as soon as possible.

During the discussion, Pellegrini was also asked about the resignations of employees of public-service broadcaster RTVS and their claims that they were put under pressure. He said that RTVS is a public-service institution that is mainly financed by public contributions, which, according to him, guarantees its independence. His opinion is that political power does not have the opportunity to interfere in the way that RTVS works, as the director of this institution is appointed by parliament. Even “the loudest” of those who quit RTVS admitted they were not prevented from doing their job and that they were not exposed to political pressure, the Slovak premier said.

Joining forces is the way out

Terrorism, the migration crisis, as well as strengthening scepticism and mistrust of inhabitants in institutions have weakened the principles of democracy, human rights and rule of law, Pellegrini also said, as cited by the Sme daily. “Multilateralism is being threatened by a lack of dialogue and tolerance,” he stressed, adding that current challenges can only be solved by joining forces through mutual cooperation of countries. In his speech, the Slovak PM also touched on corruption which is, according to him, one of the biggest threats to democracy in Europe, also casting its shadow on the Council of Europe and Slovakia itself, Sme wrote.