She has been writing the same letter for 20 years: Stop the War

Vlasta Novotná's letters of peace have received answers from Fidel Castro, the White House, and the French President’s Office. 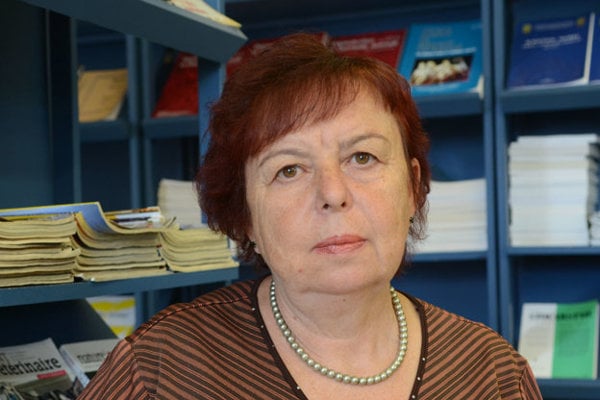 The morning is dim, cloudy and grey, clearing up slowly. In the Institute of Experimental Veterinary Medicine in Košice, translator Vlasta Novotná suddenly gets an idea – to send a peace letter.

It's the end of 1990s, and Vlasta, aged 43, sits down at the desk and starts writing the words "Stop the War". Soon the paper is full of her writing. She finishes the last sentence, Love Not Bombs, and leaves for the post office where she sends it to the Secretary General of NATO, Javier Solana, and waits. To this day, she still hasn't received an answer.

But for Vlasta Novotná, all of her letters have led to the same outcome. However, she never let herself be discouraged, and since that moment, she has been writing letters to world leaders continuously, for almost 20 years.

She asks everyone for the same – to end all wars.

She has already sent 270 letters, and her list keeps expanding. Her envelope with a stamp from a Košice post office was already received by George Bush, Barack Obama, Donald Trump, Hillary Clinton, Vladimir Putin, Kim Chong-un, Muammar al-Qaddafi as well as Fidel Castro, and several of them have answered it.

“I am already retired and I am not very well off financially; that’s why people wonder why I spend my money on this,“ translator and private English teacher, Vlasta Novotná, explains. "But what's a €1.30 postal fee compared to what I can achieve with it? To most politicians, I write in English, but to Russia and Ukraine, I wrote in Russian.”

Novotná, born in the town of Tatranská Lomnica, became a peace-maker by coincidence. Then, the world was not torn in war conflicts, nor were media full of bloodshed, which would rob her of a good night’s sleep. She knew war only from the stories of her parents, World-War-II resistance fighters.

Especially with her mum, she noticed how much the war-time experiences influenced her, and what they did to her mental state. In the Slovak National Uprising, she helped partisans, and she witnessed German soldiers kill a Jewish woman.

And her father was an anti-fascist.

“My parents often remembered the war, as it impacted them a lot.” Novotná recalls. “My mum was even hiding at Donovaly where German soldiers stopped her, suspecting her of being Jewish. What saved her was that she spoke German, and asked them whether she really looked like one. They laughed and waived her off.”

She spent her childhood reading books and watching films playing during the war. She did not plan to join army, or politics; rather, she wanted to understand what her close ones went through. One day, the idea matured in her. She understood she had to do something for her cause. Immediately.

It turned out that the most demanding part was looking for the precise address of politicians. Some things can be found on the internet, but this is usually exceptional.

“Normally, I state the name, the country and the position of the due person, and I suppose that postmen are able to find such an important person. Well, a few letters were returned due to an insufficient address… But I am very happy when I receive an answer. I have already gotten 19 of them,“ Vlasta Novotná, now aged 63, smiles.

Cuban leader Fidel Castro, former Israeli prime minister Ariel Sharon, the House of Lords in the UK, the Russian Federation Council, and the White House answered her call, as well as the French, Filipino, Czech, Polish and Slovak President’s Office.

You can be sure that Israel will always strive for peace, and the prime minister and his cabinet will continue their effort to solve the Israeli-Palestinian conflict and secure a more peaceful future for all people of our region, the Israeli ex-PM Ariel Sharon wrote.

Innocent people die, and children suffer from hunger. It brings a lot of suffering, blood, poverty, and pain.

Novotná does not write the letters anew each time; she uses a prepared pattern. All the time, the same things are written, and only the addressee, the date and the salutation differ. Apart from this, she calculates in the letters how much a tank costs, and then how much medication, milk for schoolchildren, or drinking water could have been bought for the money.

“I require them to stop the war, as it is the worst thing in the world,” the translator explains. “Innocent people die, and children suffer from hunger. It brings a lot of suffering, blood, poverty, and pain. Thus, I call on them to stop wars, to limit them, or to prevent them.”

Nowadays, she finds comfort in the idea that she may have contributed a bit to some politicians’ decisions. Former Slovak defence minister Ľubomír Galko limited military expenditures, and the UN replied that they appreciate her peace initiative.

"If someone stops a war I don’t consider it my merit, as a person alone cannot achieve anything. But I say to myself that at least I have done something for a better life,” Novotná says.

She only writes to each politician once, but there have been two exceptions: one is when a letter is returned as undeliverable and the second was when she wrote to Barack Obama. The translator wrote to him eight times.