Russian bikers have established a branch in Slovakia

The Foreign Ministry is concerned but Interior Minister Denisa Saková states they do not plan to take any action as of now. 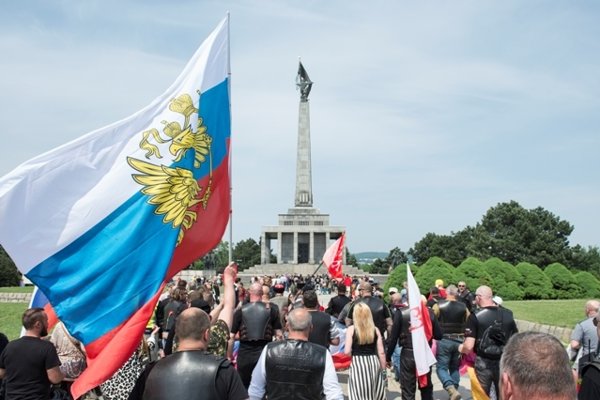 The Russian nationalist motorcycle club Night Wolves, financially supported by the Russian state, opened a branch in the village of Dolná Krupá, near the regional city of Trnava, in late June, the Pravda daily wrote on July 16.

The information was published on the Russian Embassy to Slovakia's website, whose representatives attended the event. The club will be open to the public in September.

The Foreign Affairs Ministry is concerned about the decision, claiming that the opinions of some of the club’s members are harmful and their activities should be monitored. The Slovak Information Service (SIS) intelligence agency has become interested in their activities, too.

However, the Interior Ministry does not plan to take action against the bikers for now, minister Denisa Saková said, as quoted by the daily.

Security analyst Jaroslav Naď opines that the government should step in.

The head of the Night Wolves’ Slovak branch, Jozef Hambálek, is close to the MP of the ruling Smer party and ex-interior minister Robert Kaliňák, the Hospodarske Noviny daily reported.

The opening of the European Headquarters of the bikers club Night Wolves took place on June 23 and was attended by a representative of the Russian Embassy.

In Dolná krupá, it resides in a renovated building on the periphery of the village, painted in army colours with a tall, barbed-wire fence.

The Night Wolves are a paramilitary group active in Crimea and in eastern Ukraine, recruiting future members with strong ties to Russian political leadership and President Vladimir Putin.

“We watch with concern the efforts of this club to get established in Slovakia; we perceive the opinions of some of its members harmful, especially for propositions amounting to revanchism and re-writing of history,” Foreign Ministry’ spokesman Peter Susko stressed for Pravda, adding it is necessary to monitor and evaluate the group members’ activities.

Susko pointed out that specific steps against such groupings are under the remit of the Interior Ministry, and added that the Foreign Minister Miorslav Lajčák communicated already with Interior Minister Denisa Saková. She, for her part, sees no reason so far to intervene.

Bikers have allegedly founded a civic association but the Interior Ministry has not registered any such organisation, nor has it received a request concerning this matter.

Mayor of Dolná Krupá, Teofil Mihalovič, told the daily he knows nothing about the headquarters of the bikers, adding that so far, locals are not worried and have not noticed any worrying phenomena.

On the other hand, security analyst Jaroslav Naď sees the club as a security threat: Lit is a paramilitary group […] recruiting members who then leave to fight in Crimea and eastern Ukraine,” he noted. “They have criminal activities themselves, while being officially paid by the Russian government from which they received dozens of millions of euros a year. Their activities revolve around propaganda and other activities exceeding the line of lawfulness.”

The club’s effort to expand its influence in Slovakia is part of Russian propaganda, according to Naď. "It is part of the ongoing hybrid,” he explains for Pravda. “It is unbelievable that they were allowed to found an almost military base near Trnava with barbed wire, and it is beyond my comprehension how Slovak security forces can tolerate it.” Naď added that the Slovak Information Service (SIS) has already been monitoring them but “they have only information duty: the decision-making power lies with the cabinet, and so it must decide how to treat this information,” he stressed.

Neither SIS, nor the Government Office answered the questions about the club’s activities in Slovakia.

In 2015, the most famous bikers’ club in Russia became high-profile in Slovakia when they organised a ride commemorating the 70th anniversary of the end of World-War-II and visited the WWII Slavín monument in Bratislava on May 2.

Hospodárske Noviny daily completed the picture by writing that the head of the brand-new Slovak branch is close to an MP – and former interior minister – of the ruling Smer party, Robert Kaliňák.

When Night Wolves crossed Slovakia again this May, the Russian newswire TASS wrote that “the crossing of the Slovak part of the rise is under control of the local branch of Night Wolves led by Jozef Hambálek“.

Hambálek is famous through his connections with ex-minister Robert Kaliňák. "He has known Mr. Hambálek for many years,” the Interior Ministry admitted a year ago while Hambálek himself confirmed the friendship, too. He is also the head of the volunteers’ fire brigade called Pole (Field), which was visited by Kaliňák in person several times.

Last year, this organisaiton allegedly received a subsidy of €200,000, and in 2013, a sum of €700,000 from the Agriculture Ministry, then led by Ľubomír Jahnátek, the Sme daily wrote some time ago.

Neither Kaliňák, nor Hambálek (who is currently on holiday) have answered the HN questions by the deadline.