The presidents also visited sights connected to the first president of Czechoslovakia,Tomáš Garrique Masaryk, to commemorate the centenary. 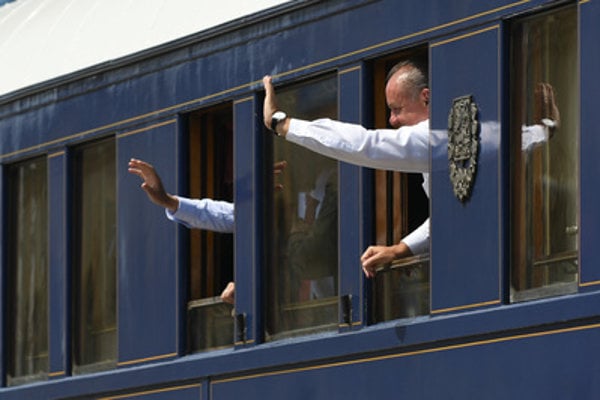 The Czech and Slovak presidents rode on a vintage train to mark the centenary of Czechoslovakia on July 29. (Source: SITA)
Font size:A-|A+  Comments disabled

Slovak President Andrej Kiska and his Czech counterpart, Miloš Zeman, took a symbolic ride on a vintage train from the Czech town of Hodonín to the Slovak town of Topoľčianky (Nitra Region) on July 29.

Both towns have a symbolic meaning, as Hodonín was the birthplace of first Czechoslovak President Tomáš Garrique Masaryk, and Czechoslovak presidents used to have a summer residence in Topoľčianky.

The steam train has a vintage Aza 80 carriage that was made for president Masaryk in 1930, the TASR newswire wrote. Before they boarded the train, the two presidents laid wreaths at T.G. Masaryk’s statue in Hodonín.

“I want to thank the Czech president for the opportunity to travel jointly on part of the ride from T.G. Masaryk’s birthplace [Hodonín] to Topoľčianky, which he [Masaryk] visited for the first time 95 years ago,” Kiska said, as quoted by TASR.

From Czechia to Slovakia

In Topoľčianky, they dropped in at a first-republic-style fair, and visited the National Stud Farm and Topoľčianky Castle.

Kiska and Zeman laid flowers at Masaryk’s statue there and signed commemorative papers to mark the 100th anniversary of the founding of the Czechoslovak Republic.

The joint train ride is part of celebrations marking the centenary of the foundation of Czechoslovakia; the date of the event was also symbolic as Masaryk visited the Topoľčianky Castle for the first time on July 23, 1923.”

If this [the establishment of Czechoslovakia] hadn’t happened at that time, Slovakia wouldn’t have existed in the form we currently know it,” the Slovak president said, according to the newswire. “One hundred years ago, the founders of the Czechoslovak state, Masaryk and Milan Rastislav Štefánik, accomplished their efforts so that we could have our own state, our territory, our statehood. We can only thank them for what they did at that time, as it wasn’t easy.”

Topoľčianky Castle is a national cultural monument. It served as a summer residence for presidents of the Czechoslovak Republic between 1923 and 1951. Masaryk was a frequent guest at the castle, where he received several diplomatic visits and cabinet members, including the prime minister.