Construction resumed on August 7, 2018, leading to some limitations for drivers on their way to Bratislava. 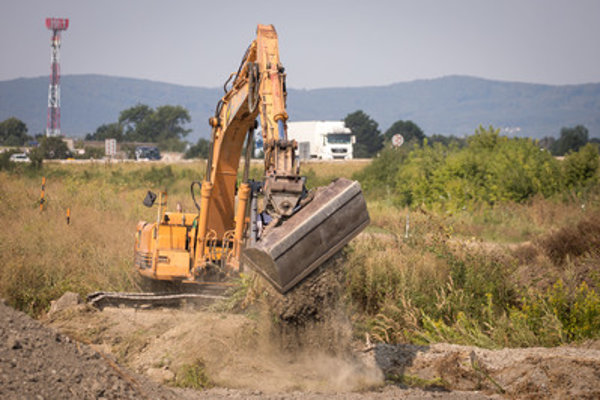 Construction on the Triblavina junction on the D1 highway near Bratislava has resumed, Transport Minister Árpád Érsek (Most-Híd) announced August 7 at a press conference with representatives of the National Highway Company (NDS), Bratislava regional council (BSK) and adjacent local authorities in attendance.

The deadline for completing the construction work is projected for 2020, the TASR newswire wrote.

Work on the Triblavina junction began in 2015, but the main construction work was interrupted due to changes in the technical requirements of the D1 highway and its planned coordination with the D4 highway. This change was followed by various objections and appeals from activists and inhabitants of neighbouring villages, all of which delayed the whole process.

“Today is the day on which all the “appeals” have expired, we can start working,” Érsek said, as quoted by TASR, adding that everything is ready.

The construction work will affect drivers on the D1 highway, as various road restrictions will be introduced as early as August.

NDS, Érsek and Bratislava regional governor Juraj Droba called on drivers to be patient and to consider using public transport when travelling to and from Bratislava.

The construction of the intersection, set to cost €19.8 million, will be funded from the state budget.

The Triblavina junction lies on the D1 stretch Bratislava-Senec-Trnava. The building was resumed after the change in construction before completion became valid, as did the reassessment of the technical solution of D1 to Blatná, from the original six lanes with collectors to eight lanes without them. The reason for the change is also the growing intensity of traffic and coordination with works on the junction D1/D4 Ivanka Sever (North) within the D4-highway and R7-dual carriageway projects, the SITA newswire wrote.

What will this mean for drivers?

Drivers in and around Bratislava must prepare for traffic constraints and, based on recommendations, should prefer public transportation to cars. If activists had not blocked the construction of the intersection, it could have been in operation by now, says the highway company.

“The traffic will be limited by continuous reduction of the number of lanes, and by limiting the maximum speed in both directions – to 80 kilometres an hour,” Police Presidium spokesperson Denisa Baloghová informed SITA. She added that after the construction works are finished, the highway will be passable in three lanes in both directions – but in the narrowed lanes – until November 1.

Head of the NDS highway company, Ján Ďurišin, complained for SITA about some citizens and activists who protested against the changes “which will simplify the life of locals and also commuters to Bratislava”, he argued. He also explained Triblavina will be able to connect to collectors running parallel to the highway in case of emergency.

Ďurišin also suggested that the appeals and protests were well-timed, as they were filed in the last moment before the construction began, thus prolonging the whole process.