Paramilitary groups like the Slovak Levies and Russian Night Wolves will not be allowed to wear the military insignia. 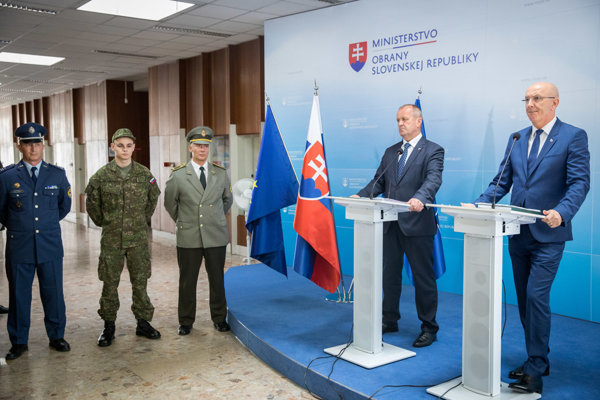 The Defence Ministry will take steps to protect the identification symbols of the Slovak Armed Forces, Defence Minister Peter Gajdoš announced on August 28 in response to the misuse of the military insignia by paramilitary organisations like the Slovak Levies.

What made the ministry act so resolutely?

Gajdoš followed the complaint that he lodged with the General Prosecutor’s Office back in July over the activities of an organisation called the Slovak Levies.

“It’s really unacceptable that members of this paramilitary organisation with an unclear purpose or any other members of similar organisations wear the uniforms of our armed forces, denotations of rank, insignia, symbols etc. that are characteristic of the armed forces of this state,” Gajdoš said, as quoted by the TASR newswire.

The ministry is drafting new legislation, according to which new uniforms and military accoutrements will need to be tagged with the label: Made for the Slovak Armed Forces. Moreover, it will be illegal for anyone to use such gear unless they are soldiers on active duty and soldiers in reserve or retirement. The latter category must be cleared with the permission of their commander.

Slovakia owns a patent for camouflage pattern military uniforms, unauthorised use of which could be classified as a misdeed or even a crime in the future, the ministry’s general secretary Ján Hoľko noted, according to TASR.

The minister also added, as cited by the Sme daily, that the new legislation will be adopted this year.

He explained, however, that hobby fishers and hunters who like to wear old, discarded camouflage uniforms will not be affected by this law.

Ministry has ordered, too, a check of the technology currently presented in museums, and requires the equipment from the complex near Dolná Krupá –allegedly shared by the Slovak levies and the Russian biker gang Night Wolves – to be returned by the end of August 2018, Sme wrote.