The centenary of the adoption of the Declaration of the Slovak Nation prompted MPs of the Constitutional and Legal Affairs Committee to make October 30, 2018 a one-time holiday. 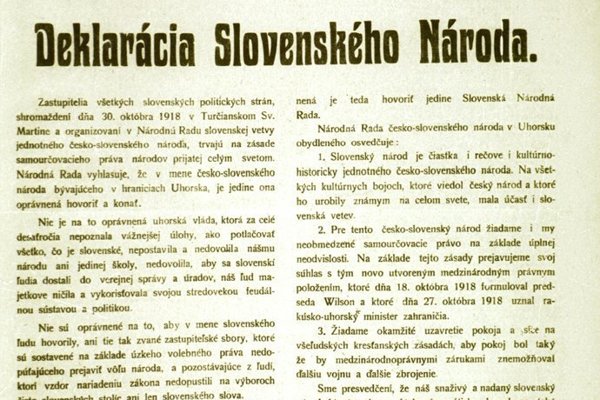 The second-but-last October of this year shall be a one-time state holiday, during which Slovakia will commemorate the 100th anniversary of the adoption of the Declaration of the Slovak Nation. This event took place on October 30, 1918 in Turčiansky Sv. Martin, the TASR newswire wrote.

The draft amendment to the Act on State Holidays was approved by the MPs of the Constitutional and Legal Affairs Committee on September 4, and recommended to be passed at the September parliamentary session.

With this Declaration, representatives of the Slovak Nation owned up to the self-determinant right of nations and to the establishment of the independent Czechoslovak state.

Originally, the junior coalition Slovak National Party-SNS disagreed with the proposal to declare a one-time state holiday. It identified with worries of employers who feared this would become a precedent.

“We see no reason for such extraordinary holidays to be introduced in the future,” it argued in its statement. However, all present SNS MPs voted for the draft amendment to proceed to the second reading in parliament in the end, TASR wrote.

In the Czech Republic October 28 is a regular state holiday, when the first independent Czechoslovak state and split from the Austro-Hungarian Empire was announced.