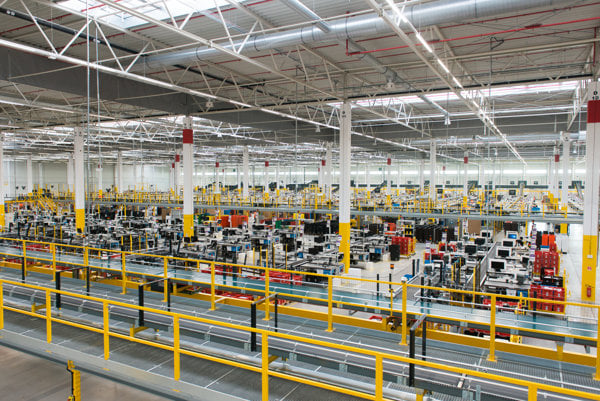 The global technology giant Amazon gained a trillion dollars on its market value only a few days ago and last year earned 178 billion dollars. It employs almost 570,000 people around the world, the Hospodárske Noviny daily wrote on September 10. Its biggest logistical returns centre is in Sereď and its employees there are now asking for better working conditions and possibly for higher salaries which has thus led to the establishment of a trade union just a few days ago.

“Among our priorities is to solve problems with overtime – which we view negatively, and also the shift schedule and to ask for better salaries,” Daniela Učňová, head of the Modern Trade Union of Amazon, told the economic daily.

“We are continuing “business as usual”, while offering fundamental rights to the trade union,” Amazon’s spokesperson for central Europe Marzena Wieckowska told HN.

So far, unionists in Sereď have no idea of the specific requests they wish to file with management. Currently, they are trying to cover the biggest base of employees possible under their umbrella. They want to launch collective bargaining by the beginning of next year at the latest.

The slow start of the union’s activities can be ascribed to lack of experience, according to the daily. This is one of the reasons why the Amazon union has decided to ask for help from the unions at the nearby Jaguar Land Rover plant.

Salaries are satisfactory for now, other conditions are not

The Sereď factory employs more than 1,000 people and is still hiring. The company increased salaries last month, with people receiving between 11 to 20 percent more depending on their position, so salary hikes are not on the table for now – but may become an issue later on.

Currently, the issues include rewards and the manipulation of the work week around holidays . Last year, employees had to work over the Christmas break with no special bonuses for holidays, even though these were part of their working week. Also, the bonuses for attendance – forming one-third to one-fifth of the employees’ salaries – are a bone of contention, as they are paid non-systemically and after a period of two months.

The number of overtime hours, which exceeds the number stipulated by the Labour Code, is another source of grievance, as is the annual bonus of maximally 8.5 percent of salary (to be paid if an employee has not missed more than 12 days), and the motivational system of blue chips and reproaching letters. The working shift could be cut from ten to eight hours as well, Učňová told Hospodárske noviny.