Lithuanian minister: If the EU wants to progress, it cannot start with a debate on ethics 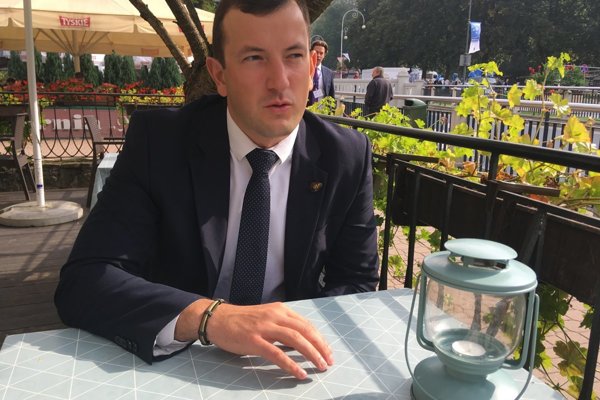 He is already the second economy minister in his country younger than 30. One could say Lithuania has a tradition of appointing young people to the top economy position. Virginijus Sinkievichus talks about how a small, post-Soviet country can compare with the USA or China today. Sme met with him at the Economic Forum in Polish Krynica.

Sme: You studied in Wales and Maastrecht. Why have you decided – unlike many other young Lithuanians – to come back?

Virginijus Sinkievichius (VS): This year, we can be very proud that lots of people are coming back. Finally, there are more people immigrating to Lithuania rather than emigrating. But as for my story, I was always eager to return home. After university graduation, I received an offer to work in the United States, but I felt the distance between my family and I would be huge. I told myself I had to try returning to Lithuania. I could always return to any country in the world, considering my international degree. But I think it was the best decision I could have made. I returned with my wife, who is Ukrainian, so it was her first time in Lithuania ever and she is very happy here. Vilnius can definitely offer a very good living environment. To me it seems to be very similar to Bratislava: a smaller city with a lot of green areas and young people in the streets.

Sme: Maybe we should emigrate to Lithuania...

VS: You should definitely try it.

Sme: Here, at the Economic Forum in Krynica, many representatives of the Visegrad Group are very critical and try to position themselves against western Europe. Where do you – i.e. Baltic countries – stand?

VS: I wouldn’t say we have to choose sides. There are many questions and many issues. The outside EU border has to be secured but on the other hand, I agree that Europe has to move forward, and not get stuck in old bureaucracy, dragging its feet behind the leading countries. There are many disagreements on different topics, and that’s probably the biggest problem within the EU. There will always be different elected parties that have to deliver different messages to their supporters. And each country will put their own agenda and their citizens first. But we have to find common ground on issues harming the EU, the unity of the EU. I think there is plenty of space for discussion.

Sme: When it comes to immigration, for example?

VS: I think there is a lot of rationality in what the Visegrad countries are saying: we have to listen. Definitely, we have to help people, but help them on site where there homes are rather than finding a solution here, in Europe. As we can see, it’s not working, it’s harming the EU. This enables anti-EU parties to come into power.

Sme: So where is Lithuania in this discourse?

VS: I wouldn’t say we choose one position over another; Lithuania always stands firm and supports a united decision within the EU. But we also cannot betray our allies. We are not satisfied with the Nord Stream II decision by Germany. We think that cutting off Ukraine and betraying it for the EU would be an extremely bad solution that would threaten not just the country’s sovereignty, but also the EU border.

Sme: At the conference, you complained about the bureaucracy which prevents research and development in autonomous cars. Could you be more specific?

VS: In the EU, we stick to the rules adopted 50, maybe 70 years ago. Back then, those were good decisions, but decades have passed. We cannot stick to the Vienna Agreement signed in 1969, which states autonomous vehicles cannot be tested in the streets of EU since, according to this agreement, there must be a driver in a car. In the Vienna Agreement, there is also a lot of focus on horses but this is not adequate for these times. Within the EU, we have to stick with the decisions that would further foster solutions rather than look to the past and say: No, no, we cannot do that because the agreement signed in 1969 doesn’t allows us. I am a big fan of the EU but I am worried about its future in terms of its competitiveness and creation of jobs. Today, we stick with the bureaucratic discussion rather than focusing on results. Look at China, India, not to mention the USA – they are all moving ahead much faster.

Sme: What should the Union do then to compete with big innovators?

VS: By 2030, artificial intelligence will dominate our society. For this, you need data. The EU wants to become a leader in artificial intelligence, which is great, but it starts with a discussion on ethics, such as what sort of data is ethical to gather, etc. But first, we must create an open portal with all possible data agreed upon as ethical and give it away to companies to develop their product.

Sme: The European Union tries to protect users from data predators, which was the case with Cambridge Analytica. Do you deem legislation like GDPR unnecessary?

VS: I think it has always been there, only now it's stricter. I wouldn’t say GDPR is that much of a problem, but there is so much focus on things like protection rather than openness. It’s always very good to find a balance, and within the EU, we have focused too much on protection.