I am not afraid, I do not work like Kuciak

Sometimes trolls burst into our office and shout at us until we convince them to leave, but they never sue us, says David Crawford from the newsgroup Correctiv who were the first to discover who downed MH17 over Donetsk. 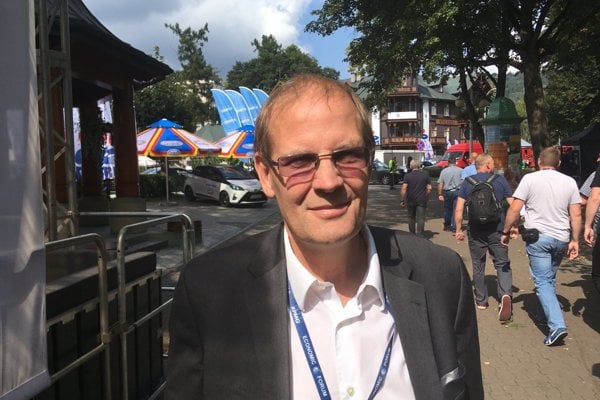 You knew Anna Politkovskaya who was killed in Russia, probably in connection with her work as journalist. What was she like?

As a freelance journalist, he has reported on West German spy services, the Stasi and Al-Qaeda. He worked for the Wall Street Journal as a freelancer from 2001 and an investigative correspondent from 2004. He has longstanding experience with data journalism. With the help of the Chaos Computer Club he decoded the sensitive data of the so-called “Stasi List” which was published in 1990. He later went on to report on corruption in international business. He was able to uncover dubious payments made by Dresdner Bank to the current Russian President Vladimir Putin. He received the Business Journalist of the Year Award for his coverage of the Siemens bribery scandal. He was a finalist for the Pulitzer Prize and the International Consortium of Investigative Journalists Daniel Pearl Award as a result of his research on the dismantling of democracy in Russia.

DC: You could say that she felt a powerful weight upon her. When her children were young she came to live outside of Russia for several years because she thought it would be too dangerous to stay. When her children were old enough to decide what they wanted to do for themselves she came back to Russia and started her dangerous investigation. She felt she needed to do this. She had several very bad incidents, she was poisoned once and she knew what she was doing was dangerous. When I was talking to her I realised she knew she was going to be killed for doing what she thought was right. But she did not want to live in a dictatorship, she wanted to live in a country with a free press. That was her decision. It is not something I could do. I have a different approach to journalism but she believed that is what she had to do.

You have written a lot about Russia. Did you experience any dangerous situations there?

DC: I have always been based in Berlin. It would be very dangerous for me to be in Russia and have the police and intelligence services following me around. Anybody I would be seen talking to would be in trouble. I have done a lot of stories about Russia, Gazprom, bribery in Putin’s circle but not staying in Russia. I did it by looking for witnesses, following the money trail, doing what you can do from outside. It is safer to work on these topics without actually being in Russia. It is safer for the people who I am working with.