Friday protests organised by the For a Decent Slovakia initiative showed that light shall prevail over darkness. 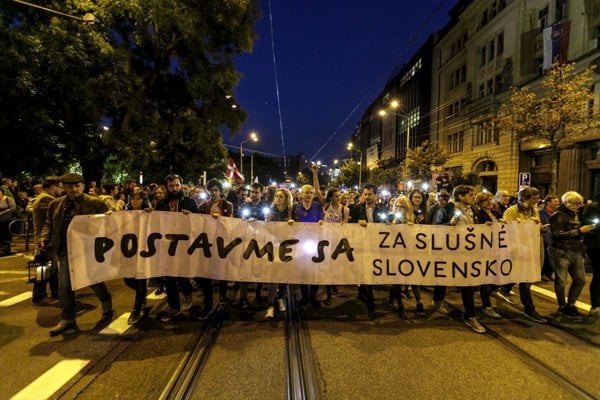 The For a Decent Slovakia movement that emerged after the murders of Ján Kuciak and Martina Kušnírová in March resumed protests around the country this Friday, September 28.

In Bratislava, an estimated 5,000 people attended the protest gathering in front of the national parliament.

“It is great that so many people came,” one of the organisers, Peter Nagy, told The Slovak Spectator. 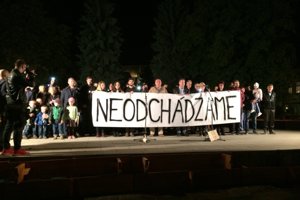 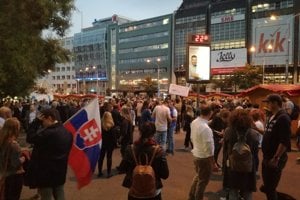 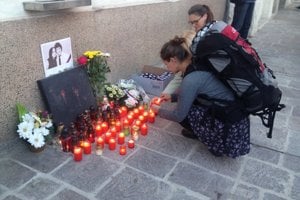 First, the crowd of several thousands gathered at the SNP Square and then marched up Poštová Street past the Presidential Palace and along Palisády Street up to the Castle Hill, where the gathering with speeches took place in front of the Slovak Parliament building.

Protest organisers asked the protesters to bring light torches, candles, or turn on the lights on their mobile phones. With the protest taking place after sunset, the idea was to show that “light prevails over darkness”, as organiser Karolína Farská noted in her address to the crowd after the march.

Things got worse, not better

The main reason why the organisers believe Slovaks still need to protest against the current government is that there has been little progress in the investigation of the murder. This changed one day before the protests were scheduled to take place, when the police arrested eight people and charged three of them with premeditated murder. Police continued their activities on Friday before the protest, and are expected to share more details about their results next week.

The organisers nevertheless insisted there were other reasons to protest too: the lack of clarity surrounding the elections of the Constitutional Court judges and the law on the selection of the new Police Corps president.

“Even though the government has been through half a year of ruling, we see no improvement, quite the contrary, the situation has deteriorated,” the organisers stated. They listed the appointment of Denisa Saková as the interior minister, the scandal surrounding the abduction of the Vietnamese citizen that unfolded over the summer, and the return of former Police Corps president, Tibor Gašpar, to the interior department as the advisor to Saková among the issues they see as problematic.

Along with the Bratislava protest, gatherings and marches also took place in Košice and Banská Bystrica, where hundreds of people came to support the cause.

Taking back the country

The Košice protest was attended by the mother of the murdered woman, Zlatica Kušnírová.

"Slovakia is ours, we shall not let them steal it from us," Kušnírová told the crowd in Košice.

Former investigative journalist Zuzana Petková, who closely collaborated with Ján Kuciak and who recently left journalism to lead the Stop Corruption foundation, was one of the speakers at the Bratislava protest.

“I do not want free lunches, I want to know the name of the person who ordered the murder,” she told the crowd, and voiced more demands that the people in the crowd share: rule of law and a different political culture.

“In the past half-year, we have found that there are many more good and honest people than we thought,” said journalist Martin M. Šimečka while speaking to the crowd.

The organisers concluded the gathering by calling on people to attend municipal elections, taking place on November 10.

“This country belongs to us, not to the mafia and corrupt politicians,” organiser Juraj Šeliga told the crowd. “We are going to take it back.”