The country has good macroeconomic stability, but insufficient innovation capacity.

Slovakia’s competitiveness dropped slightly compared with last year. The country placed 41st in the Global Competitiveness Report 2018, with an overall score of 67 points. It was two places down compared to the previous report.

The report, published by the World Economic Forum (WEF), assessed the competitiveness landscape of 140 economies.

“Slovakia’s position slightly worsened even though our overall score has improved slightly,” said Peter Serina, executive director of the Business Alliance of Slovakia (PAS), WEF’s partner organisation. “We were overtaken by countries that improved the conditions for doing business and economic growth more significantly than Slovakia.” 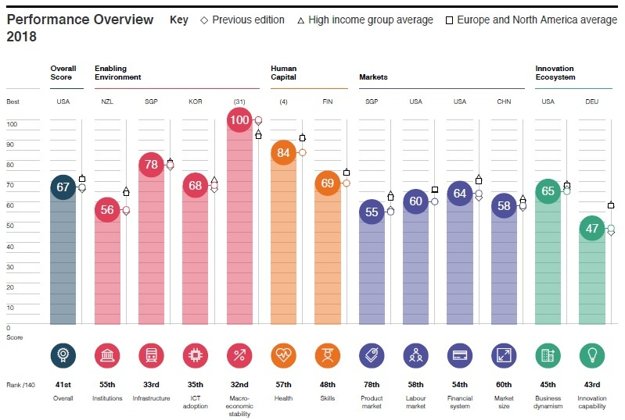 “The more significant growth of Slovakia in the ranking is hindered by the chronic problems of the business environment, particularly the quality of public institutions,” Serina said, as quoted in a press release. “We still have to close the gap in improving the independence of courts, law enforcement, fight against corruption and the reduction of administrative burdens.”

What is the aim of the report?

The Global Competitiveness Report is designed to help policymakers, business leaders and other stakeholders around the world shape their economic strategies in the era of the Fourth Industrial Revolution, according to its authors.

“We hope it will also serve as a call to action to engage in the long-term, holistic, agile and far-sighted leadership required to build the competitive economies of the future, lift living standards and provide opportunities for all members of society,” the report reads.

This year, WEF ranked 140 countries, using 98 indicators divided in 12 pillars, measuring them on a scale between 0 and 100. The score indicates how close the country is to an ideal state.