Why is an 18-year-old doctoral dissertation causing an uproar among the public?

Speaker of Parliament Andrej Danko banned the public from viewing his dissertation, facing protests and a criminal complaint as a consequence. 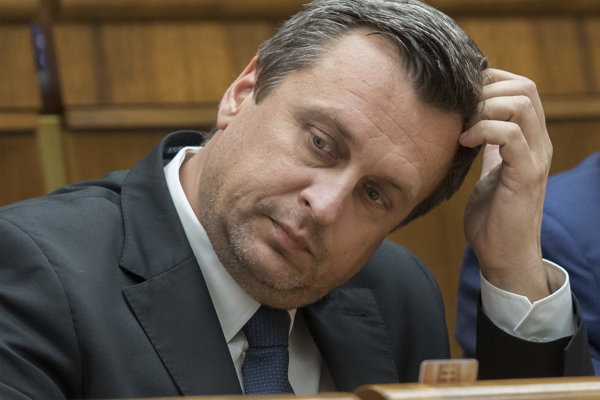 When some Czech politicians stepped down when it turned out they did not earn the academic degrees they had been using lawfully, the Slovak Denník N daily looked at the degrees of Slovak politicians. What they discovered led to a passionate discussion revolving around the doctoral degree of the parliament’s speaker among the Slovak public for weeks.

In its first report, Denník N wrote that it was not clear where Andrej Danko gained his “Doctor of Law” degree (with the JUDr. Abbreviation before one’s name). Danko received the equivalent of a master’s degree from the law school of Bratislava’s Comenius University in 1998. When Denník N looked for his doctoral thesis there, they did not find it. Reporters of the public-service RTVS later found that there was a thesis from 2000 signed with Danko’s name at the law school of Matej Bel University in Banska Bystrica – but it was not accessible to the public.

“In practice, it is quite the opposite: graduates make their thesis public,” professor Emil Višňovský from Comenius University explained for The Slovak Spectator, adding that the policy in academia today is to share and collect knowledge and make it accessible to all those who need it.

Neither did Danko “conceal” his thesis from the public immediately after it was written: Denník N found that he filled out the licence contract to restrict access only to “responsible people at the university” just after reporters started inquiring about his studies.

Danko passed his bar exam in 2003 and was active as a law attorney until 2012, when he was elected chairman of the Slovak National Party (SNS), according to his CV on the SNS website.

The JUDr. title does not make any difference in terms of competencies to someone with a master’s degree or its equivalent, noted Eduard Burda, dean of Law Faculty of Comenius University.

“The licence to work as a lawyer depends on a master’s degree, not JUDr.,” he told the Sme daily.

The JUDr. (Juris Utrisque Doctor) degree is not an equivalent to a doctoral degree as known in the Anglophone academic world: a PhD. It can be granted to a person who holds a master’s degree or its equivalent in law and successfully defends a doctoral thesis (Rigorosum) and passes an exam. In that sense it is much less rigorous than obtaining a PhD, which takes three to five years of full-time doctoral studies.

Academics are not silent

Danko’s act did not create uproar only among the lay public but angered some university teachers. The Faculty of Natural Sciences of the Comenius University was the first to speak up on October 5th and voiced the opinion that Danko’s behaviour worsens the image of university education in the eyes of the public.

Matej Bel University (UMB), where Danko obtained his degree, also responded. Its Rector Vladimír Hiadlovský signed an official appeal to Andrej Danko on October 13th to make his thesis accessible again. As he explains, the university received an official letter from Danko with his request and, as shown by the law analysis the university ordered to resolve the situation, the university was obliged to meet the author’s request, based on copyright law.

“The University of Matej Bel is an institution that respects the law, honours academic values, ethics and morality. Therefore, the management of UMB is appealing to Andrej Danko to make his thesis public again,” wrote Hiadlovský in the statement.

Students and employees of the university organized a protest in Banská Bystrica, bringing their own theses and calling on Danko to show his own work. 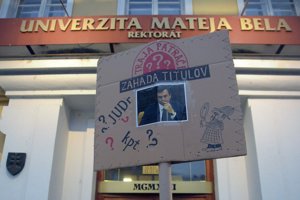 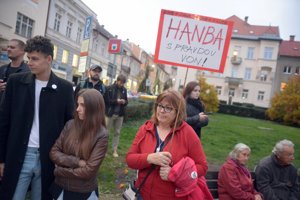 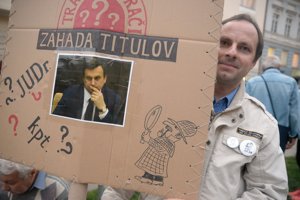 Protesters appeal to Andrej Danko to show his dissertation (5 photos)

Meanwhile, Lucia Ďuriš Nicholsonová, opposition MP of SaS, filed a criminal complaint against Andrej Danko. She said she suspects him of abusing his authority because there are so many doubts in the case. She opines that Danko may be trying to cover up his plagiarism or something similar that would, given his position, mean that he misused his power. She stressed that it was not possible to agree on concealing the theses back in 2000 when Danko submitted his dissertation.

Darina Parobeková, a head advocate in intellectual property and IT law from the Ružička Csekes law firm, opined that it is not possible to take the side of unequivocal interpretation concerning to what extent the university could use Danko’s thesis, based on information available from public resources.

Moreover, when Danko handed in his thesis, different regulations were in place, Parobeková explained. It was necessary to gain the consent of the author to use the work. When giving consent, the author shall state to what extent. At that time, a contract to distribute work by circulating or renting a copy existed, which would have theoretically given the university the opportunity to publicly circulate the work of Andrej Danko. But we do not know whether they really concluded such a contract.

“It is true that the author has the right to withdraw his consent, if it is not in contradiction with the law or participation agreement,” she noted, adding that the question remains to what extent Danko gave his consent to the university when he submitted his thesis. Only those involved know this and therefore, it is impossible to say whether it was right or not to meet Danko’s requirements.

Meanwhile, Comenius University announced that a doctoral dissertation with the same title and same number of pages is missing in its university archive. As Dennik N reported, it was defended only one year before Danko defended his work at UMB. The last time someone borrowed it to study was 2011. The university started an investigation to find out where the dissertation could be.

When a university student graduates today, his or her thesis, whether at the BA, MA or doctoral level, is registered in the Central Register of Final Theses (CRZP) and checked by anti-plagiarism software to ensure its authenticity.

All the theses in the register (applying to those sent after August 31, 2011) must be published. An author may decide to hide it from the public for a maximum of one year. If the author wants to hide the thesis for a longer period, the rector or dean decides if the reason for not publishing work is serious enough, Julius Kravjar from the Centre of Scientific-Technological Information explains.

“These rules, however, do not apply to theses older than August 31, 2011. Until then, only copyright law applied to theses,” Kravjar told The Slovak Spectator. Back then, universities used their own system to check plagiarism, often foreign commercial systems.

Despite the protests of the general public and the academics, Andrej Danko has not disclosed his thesis as of October 23. He argues that Dennik N is only trying to discredit him since there is a possibility of him running for president.

He added that he is not hiding his work, only restricting access to it.

“Responsible people, including the rector, have access to the dissertation any time,” Danko sent word via his spokesperson Tomáš Kostelník, as quoted by the TASR newswire.