“There are no nations in the world closer than Czechs and Slovaks,” the Czech President said on this occasion. 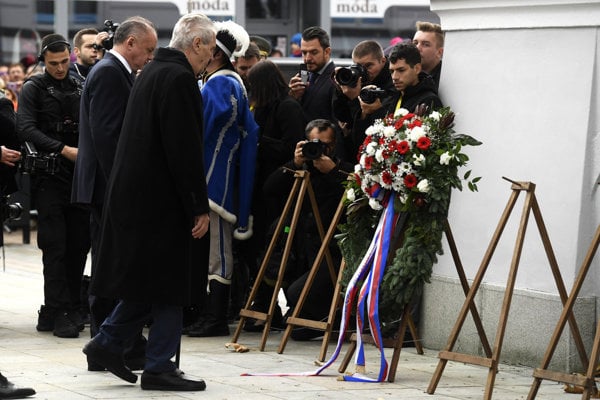 The formation of Czechoslovakia in 1918 allowed Czechs and Slovaks to safeguard their nationalities, languages and the freedom to develop, said Czech President Miloš Zeman on October 30, during celebrations marking the 100th anniversary of the Declaration of the Slovak Nation and the creation of Czechoslovakia.

Both nations were under threat of national assimilation – Czechs by Germanisation and Slovaks by Magyarisation (or Hungarisation), Zeman pointed out, as quoted by the TASR newswire.

“There are no nations in the world closer than Czechs and Slovaks,” he said. “It’s not just the language similarity. Hence, I hope we’ll stay together in the European Union for many years to come. Just as I wished the Czech nation a prosperous future two days ago at Prague Castle, I wish the same to you. I wish you love, happiness, friendship and a prosperous future.”

Czech Prime Minister Andrej Babiš (himself of Slovak origin) emphasised that over the course of a single century, Slovaks have changed from an oppressed ethnic minority in Austria-Hungary to a confident and independent nation. “A member of the EU and NATO that prospers and would have undoubtedly made the signatories of the Martin Declaration proud. The gathering that met at this place exactly a hundred years ago demonstrated that Slovaks are an independent nation willing to take their own fate into their hands,” he stated, as cited by TASR.

Without the marriage between the two nations, neither would have accomplished self-determination in the post-First World War era on its own. “Together, however, we made it,” Babiš commented. “I understand the joint past, which lasted a respectable 75 years, as a commitment towards the people of the Czech and Slovak Republics. There are no better ties in Europe or elsewhere in the world than those between the Czech and Slovak Republics, between our nations. May they remain that way forever.”

The nationwide celebrations of the 100th anniversary of the Declaration of the Slovak Nation started October 30 with a wreath-laying in front of the historical building of the former Hornouhorská (Upper-Hungary) Banka Tatra on Štefánikova Street in Martin, the SITA newswire wrote. On its façade, a board commemorates the adoption of the Declaration on October 30, 1918 – in what was called Turčiansky Svätý Martin at that time – that marked the split of the Slovak nation from Hungary and its decision for independence. It was used by Slovaks to claim their right to self-determination and co-found Czechoslovakia in 1918. 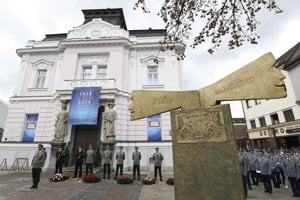 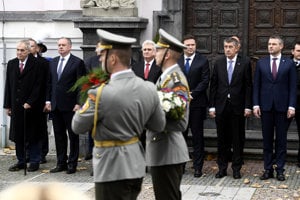 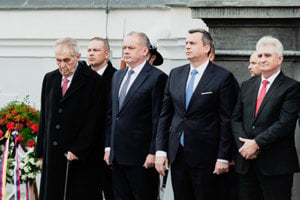 There were hundreds of public figures behind the formation of Czechoslovakia who deserve our gratitude and respect for their courage and determination, President Andrej Kiska said.

In his speech, Kiska pointed to the chequered and arduous path leading to the declaration of an independent state of Czechs and Slovaks, and related individual historical events, in particular the inking of the declaration on October 30, 1918.

“Around 200 public figures gathered here to declare the right of self-determination for the Slovak nation and the willingness to live in a shared state with the Czech nation in the Declaration of the Slovak Nation,” he noted, as quoted by TASR. “Let’s say up front that these individuals had it rough: they faced persecution, imprisonment, but fought for the rights of us, Slovaks, so please, let’s show respect for the founding fathers of the Martin Declaration,” the president summed up.

PM Pellegrini said that it was in Martin where political initiatives were engendered, which fundamentally altered the fate of the Slovak nation and laid the groundwork for Slovaks to enjoy their independent statehood and take responsibility for their own future.

“We need to realise that no matter what kind of political project or idea we champion, the project can’t be successfully promoted without the support of the public,” premier noted. “The world is changing, new challenges appearing. Without sticking together for the state and nation and its future, we’ll never move forward.”

The Czechoslovak Republic was significant in triggering the all-round development of the Slovak nation, Parliamentary Speaker Andrej Danko said, adding that the relations of the two nations “have remained above-standard to this day, and it is these ties and our peaceful break-up in the early 1990s that inspire respect around the world. The break-up set an example in terms of maturity and refinement”.

The commemorative event attended by top Slovak and Czech officials followed up on weekend celebrations (October 27-28) held in Czech and Slovak towns on the 100th anniversary of the founding of Czechoslovakia.