Greenpeace activists were released from custody after the general prosecutor said there was no reason keep them in detention. 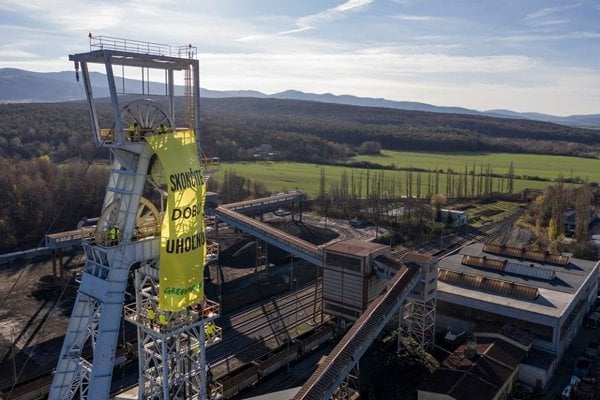 Dozens of people gathered in front of Prievidza district court in Sunday 2, shouting “activism is not a crime”. The mood was good and most of them expected their friends, colleagues and family members to be home soon.

The court was deciding on the twelve Greenpeace activists who on November 28 snuck into the area of Hornonitrianske Bane Prievidza mines, climbed the mining tower and hung a 15-metre-long banner with the words: “End the Coal Era”. They pointed out that coal mining is an obsolete and expensive way of producing energy, which is harms nature.

As a result the miners shut down the tower and declared a critical state, which meant that all the mine departments ceased to work.

The Prievidza district court ruled that these dozen activists will be prosecuted while in custody.

"I was standing with the families of the arrested activists in front of the court and not one them expected that they would end up in custody," Nina Vidovencová, who is a friend of one of the detained activists, told The Slovak Spectator.

“These decisions are only logical if everybody who is obviously dangerous and who commits crimes is in custody,” PM Peter Pellegrini (Smer) wrote on Facebook, adding that he is against such a ruling despite supporting the mining.

All 12 Greenpeace activists were released from custody on December 4, following the order of General Prosecutor Jaromír Čižnár.

“There are absolutely no reasons for the so-called continued detention,” Čižnár said, as quoted by the Sme daily.

Greenpeace has been criticising mines for several years and eventually decided to take more invasive action. They entered the mining area through the open entrance without security.

They split into two groups. The first group created an exclamation point on the ground, and the second climbed to the tower and spread out the banner.

“In this case, they waited a few hours on the tower to display a large protest banner,” former director of Greenpeace Juraj Rizman told the Sme daily. “The weather conditions were bad, and they did not want to endanger themselves or their facilities. Only when the wind stopped and cleared, did they place a banner on the tower.”