Bratislava: Where to go for mulled wine and Christmas presents? 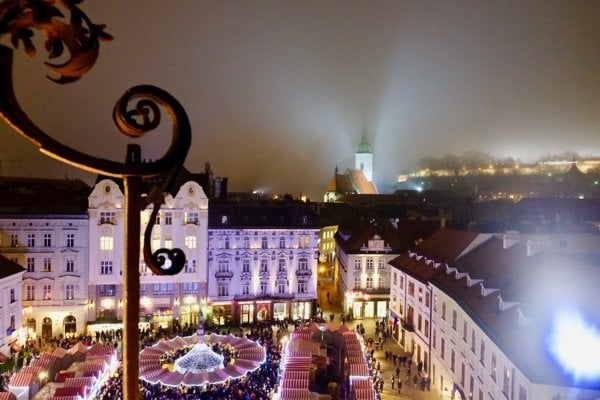 Christmas markets have become a favourite meeting place for many in Bratislava. People go there to enjoy local specialties like cigánska - a slice of bread with pork, onion and mustard – or mulled wine, meet friends and family as well as buy Christmas presents. In addition to traditional markets at the Main and Hviezdoslavovo Squares, Bratislava’s boroughs and farmers markets organise their smaller versions of Christmas markets. The Good Market and Urban Market have also prepared special, Christmas editions. 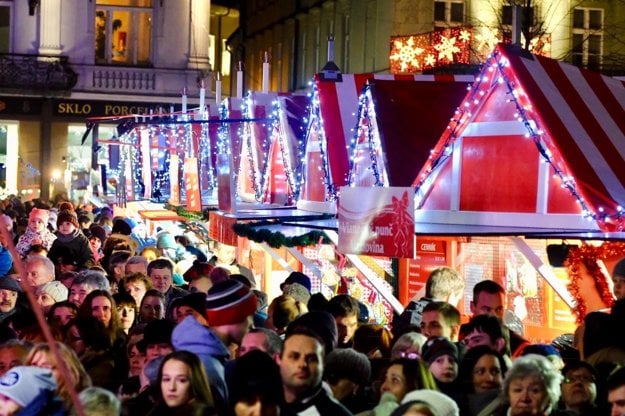 Bratislava Castle is hosting Christmas markets for the third time. Fourteen stalls with traditional Christmas dishes and drinks, souvenirs, as well as Christmas assortment and complimentary activities are open every day from 12:00-21:00 until December 19. The market is held in the spirit of tradition, family and helping others.

For children, creative workshops are prepared, enriched with courses on how to make things from corn husks (šúpolie) or glass painting. Adults can create their own Christmas tree wooden decorations using the decoupage technique every Wednesday. During the weekends concerts will present jazz diva Jana Gavač, the girl trio Chick2Chick, and the Ľudovka folk band. This year, the Slovak National Museum is participating in the event. It offers discounted entry fees for current exhibitions at the castle.

Listen to the podcast about Christmas markets in Bratislava:

The Christmas markets in the borough of Rača will begin in front of the German Cultural House on Friday, December 7, and will end on Sunday, December 9. The programme includes performances of children and pupils from local kindergartens and elementary schools and the Arion country music group from Pezinok, theatre performance, folk music and St Nicolaus dance party. Market stalls will be open on Friday and Saturday from 10:00 to 22:00 and on Sunday 10:00 to 20:00.

This year’s Advent cultural winter began in Ružinov on December 1 and runs until 23 December. It includes the Ružinov Folk Christmas (December 13) with the folk ensemble Karpaty and the serving of the kapustnica sour cabbage soup; the Prievoz Christmas Market (December 14); the charity Christmas Festival with Children (December 15), raising money for socially disadvantaged families; and the charity collection of Christmas cakes and pies called Baked with Love (December 23) in the local house of culture DK Ružinov, Patrik Cucor, marketing manager of the local culture organisation, Cultus Ružinov, informed the TASR newswire.

From November 27 onwards, 10 stalls with refreshments and two stalls with Christmas goods welcome visitors to the Christmas markets at Námestie Republiky in Petržalka. They are open from Monday to Friday from 11:00 to 21:00 and during the weekend from 9:00 to 21:00. The programme includes theatre, Christmas carols and a concert by the rock band O.B.D.

Visitors can find original delicacies and Christmas presents from local producers in the Slnečnice Market shopping centre. Every Saturday in December the local Trch houses the special Christmas Fajn Saturdays with home and eco products. Moreover, St Nicolaus will show up for children on Saturday, December 8. Accompanied by the devil and an angel, he will arrive at 13:00 and stay until 16:00.

Christmas markets in front of the house of culture Dúbravka will begin on Friday, December 14, and run until December 16. Approximately twenty stands will offer traditional craft goods, gifts, ornaments and food. In addition to the stands, visitors can enjoy the Christmas programme, whose peak will be the Christmas concert by singer Richard Müller. It will be held at a local house of culture on Sunday, December 16 at 19:00. The admission is €38.

The Karloveské Vianoce event will be held this year from December 14 until 16 in two locations: the local centre of culture and the settlement of Dlhé Diely. During the event, traditional stands will be replaced by the new BKIS Christmas bus. It will arrive in Dlhé Diely on Saturday, December 15 at 10:00 and remain until 13:00. The bus will offer tea, Christmas punch, mulled wine, cakes and other goodies. Part of the event will be the neighbourhood exchange of gifts, clothes, books and LPs. Those hungry will get a bowl of sour cabbage soup – kapustnica, said Karlova Ves borough’s spokesperson Branislav Heldes. 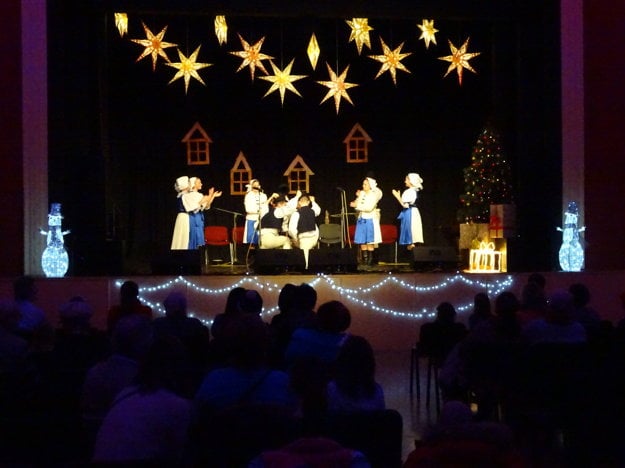 A new feature of this year’s Karloveské Vianoce will be two dance houses in the local house of culture. The first one with the Taste of Brass orchestra will take place on December 14 at 19:00 (entrance fee: €5) and one day later at the same time it will be a Christmas dance house with the B – Swing orchestra (entrance fee: €8). In addition, local art schools and the State Conservatory will perform. The programme will culminate on Sunday, December 16, at 18:00 with the Christmas concert by singer Katka Koščová.

Horský Park and the Fresh Market

The Horáreň gamekeeper house in Horský Park will host the traditional Small Christmas Market. On the second Advent Sunday, December 9, from 10:00 until 16:00, visitors can buy original Christmas presents for their loved ones in the heated Forest School and in the garden in front.

The Fresh Market in the Nové Mesto borough is inviting St Nicolaus, who will bring small presents for children on Saturday, December 8. Christmas Markets will run from December 17 to December 22.

The Dobrý Trh, or the Good Market in English, will take place exceptionally on Sunday, December 16 from 10:00 to 20:00. In addition to the Old Market Hall it will be expanded to the entire SNP Square. This edition of the Good Market will draw attention to the historical function of this central city space, which was called the Market Square at the beginning of the last century.

“SNP Square was once behind the city walls, and it was historically a square where regular markets were held and trade boomed,” said Illah van Oijen, one of the organisers of the Good Market, as cited in the press release. The market has not been held for a hundred years in the area of the former Market Square, which today is divided into several units. The Good Market wants to link SNP Square with the space in front of the Old Market Hall in one large public space in cooperation with the Živé Námestie (Living Square) project.

Organisations located on the square, like Kunsthalle, the Polish Institute, and local restaurants, will participate in the programme. 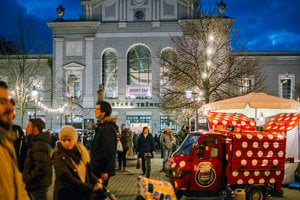 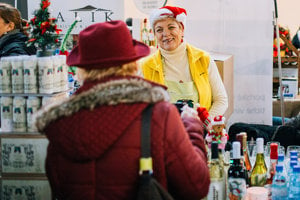 The Old Market Hall will present designers offering their original design pieces. Children’s goods, books and clothing will be also be on offer. Space will be given to sellers of food and non-profit organisations right on the squre. Children and sheltered workshops will sell their products on the Children’s Market in the Flagship restaurant.

Those interested can attend guided tours of building roofs around SNP Square and Kamenné Square. The WhatCity podium will host discussions about the Živé Námestie project as well as the future of civic projects in the borough of Old Town and culture in the public space. There will be workshops for children and adults as well as concerts.

A special programme for children includes the Fairy Tree Forest of the Bratislava Cultural and Information Centre on SNP Square. A fairy tale with a happy ending awaits families with children. Children can also watch the making of ice sculptures.

Gamča, the largest sales event of independent fashion, design and artistic creation in Slovakia, combined with a number of accompanying events, will be held in the grammar school on Grösslingova 8, from December 7 until December 9. The topic of this year’s Urban Market is Inheritance.

The Christmas market in the Baroque castle of Schloss Hof just beyond the Slovak-Austrian border offers a Christmas assortment, including candles, ceramics, decoration as well as food and drinks. The market takes place each Saturday and Sunday until December 23, from 10:00 until 19:00. 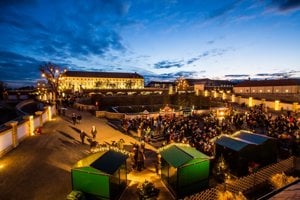 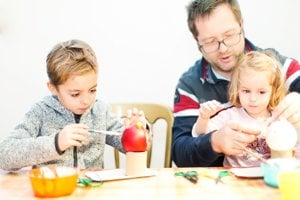 The charming chambers of the castle hosts the “Silent Night, Holy Night - the 200th Anniversary of the Christmas Carol” exhibition, depicting the story of this famous Christmas song by the Austrian composer Franz Xaver Gruber.

The varied programme for the family includes a scene from Bethlehem with live animals, pony and train rides and a carousel. Children can attend creative workshops and bake their own Christmas pastries.

The best way to get to Schloss Hof is either by car, train and a free bus from the Marchegg train station, or on foot from Devínska Nová Ves via the bridge over the Morava River. However, the lower, so-called Moravia gate easily reachable from the bridge is closed during the winter. Visitors should use the main entrance instead. Admission to Christmas markets is €6 for adults and €3 for children. A family ticket costs €15 euros.