The shot has nothing to do with refugees. 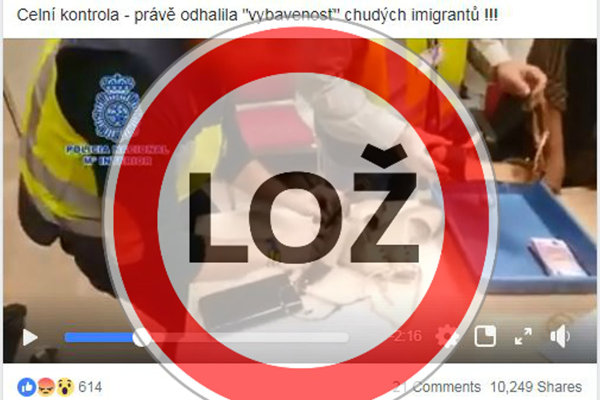 The recording does not display an action against migrants, but comes from a totally different event. (Source: Facebook)
Font size:A-|A+0

A customs inspection has just revealed the facilities of “poor migrants”.

The video shows a customs inspection where officers cut into some shoes revealing a number of hidden five hundred Euro banknotes.

The video containing the text "Customs inspection has just revealed the facilities of “poor migrants” became viral as soon as it was published. The clip was without sound or comment in the form of subtitles. On November 23, the video was shared by 10,200 Facebook users.

The Czech web manipulatori.cz also warns against this hoax.

Not a migrant, a smuggler

In fact, the recording does not display an action against migrants, but stems from a totally different event. The original video was published in 2016 by Spanish television Malaga 24h and showed a customs inspection.

The so-called migrants were in fact smugglers. A 29-year-old woman on her way to Colombia had a stop-over in Spain. The Spanish daily El País also reported on the inspection.

“Officers found four women's double-bottomed boots in her suitcase. In total the woman was transporting more than €180,000, to Colombia,” says the daily.

Authors of hoaxes often use similar manipulation techniques to the ones used in this video. They use a photo or video from a totally different event and create new, more attractive content for their audience.