Will Bratislava gets its first modern skyscraper?

The tower, part of the Eurovea extension, is designed to be 168 metres high. 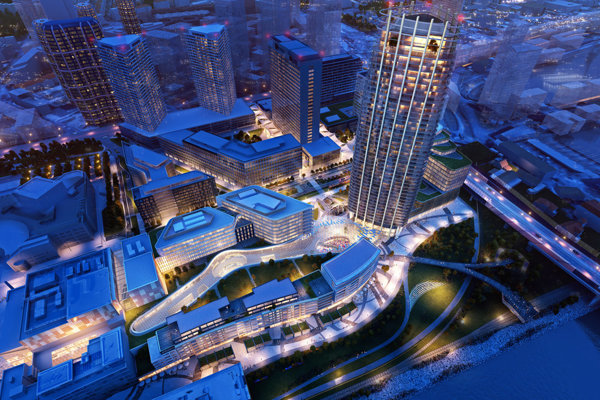 Bratislava is scheduled to get a new landmark within a few years. The developer J&T Real Estate (JLRE) has obtained a development permit for the project of extending Eurovea on the Danube embankment. Included is the 168-metre high Eurovea Tower, the first building in Bratislava that meets the latest criteria for being called a skyscraper, i.e. higher than 150 metres. The residence tower will have 47 storeys and have almost more than 380 residential units. The project will add 84,000 square metres of retail premises to the existing ones in the first phase of Eurovea, the Hospodárske Noviny wrote.

“The height of 168 metres is the result of detailed expert evaluation,” said Daniela Stričková, spokesperson of JLRE. They took into consideration its location in the city zone, influence on the skyline and views of the city, as well as optimal technical and technological solutions.

But the planned height of the building has raised negative responses from the public as well as experts. The loudest critic is Dušan Pekár, the former mayor of the Ružinov borough, in which the tower will be built. He has claimed that the tower is at odds with the Bratislava master plan.

“The original study contained a 20-storey building,” he pointed out. A large number of architects and urbanists share his opinion. But the project has already won the development permit and is waiting for a construction permit.

The height of buildings is not capped in Bratislava even though there is such a plan. The Bratislava city council has not yet passed regulation proposing capping future buildings to 111 metres, i.e. the height of the National Bank of Slovakia. Since the introduction of the draft, JLRT has built Panorama Towers, the highest residential buildings in Slovakia, on the Danube waterfront. They are 112 metres high.