People will be able to take it home until Christmas. 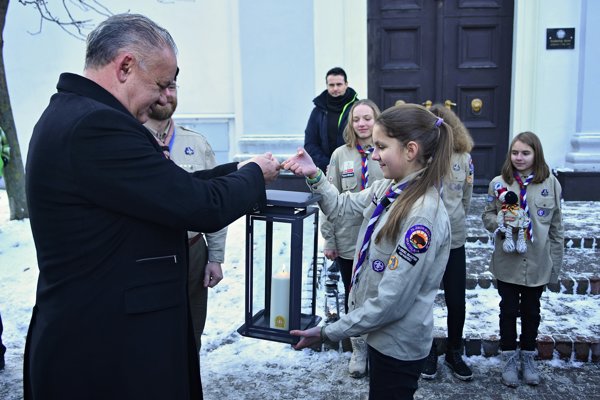 People can come and take the Peace Light of Bethlehem from churches in Slovakia again this year. A delegation of scouts brought the light to President Andrej Kiska on December 16 in Poprad, and it was later given to other places in the country too.

Listen to the podcast about Slovak Christmas traditions:

“The scouts delivered the light to people during a holy mass at the Holy Saviour Church in Bratislava’s Main Square at 16:30, where it will be at the disposal of the populace until Christmas. It can also be found in most Slovak churches,” said Marián Suvák, the coordinator of the Peace Light of Betlehem, as quoted by the SITA newswire.

During the last weekend before Christmas, on December 22, scouts will distribute the light across Slovakia via train. They will deliver it to more than 330 towns and villages, as well as to places without train connections.

The Peace Light of Bethlehem was also lit on Lomnický Štít peak, the highest inhabited place in the country. In addition, it will be brought to households, hospitals, asylum facilities, social care houses and churches by hundreds of scouts, reported SITA.

The light was brought to Slovakia on the evening of December 15 by Slovak scouts, who received it from Austrian scouts during a ceremony held in Linz. They later passed it on to Polish and Ukrainian scouts.