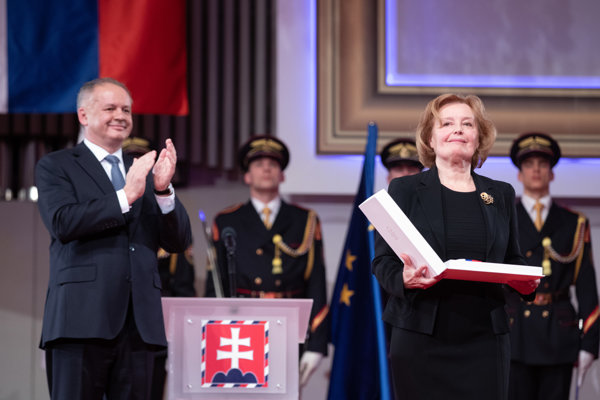 President Andrej Kiska has awarded state honours to 30 personalities from social and cultural life for the last time in office.

"The selection was difficult as there are more people who deserve the award in Slovakia," Kiska said in his speech, as quoted by the Sme daily.

He awarded in memoriam journalist Ján Kuciak for the development of democracy and journalism, and Alexej Fulmek, head of the Petit Press publishing house, which publishes the Sme daily and The Slovak Spectator.

"I appreciate the honour from President Andrej Kiska as it recognises the role of Sme in the modern history of Slovakia and serves as an appreciation of the work of all the journalists who have participated in this story," said Fulmek.

Kiska recognised people who made Slovakia a better, more decent and just place to live, which he emphasised in his speech.

"Real leaders who show how to overcome obstacles and inspire others," Kiska said, as quoted by the TASR newswire. "People who help create, protect, and develop the identity of the Slovak Republic."

In total, 15 women and 15 men received a distinction from the president at the concert hall of the Slovak Philharmonic in Bratislava's Reduta.

Actor Richard Stanke of the Slovak National Theatre, one of the faces of recent protests taking place after Kuciak's murder, was awarded, Sme wrote.

Former ombudswoman Jana Dubovcová, who criticised the ruling Smer party in the past, and former MP Magda Vášáryová, who presides over women's society Živena, were also awarded.

ORDER OF THE WHITE DOUBLE CROSS (only to foreigners)